Quiz question: Which way does water flow in the Bosphorus? 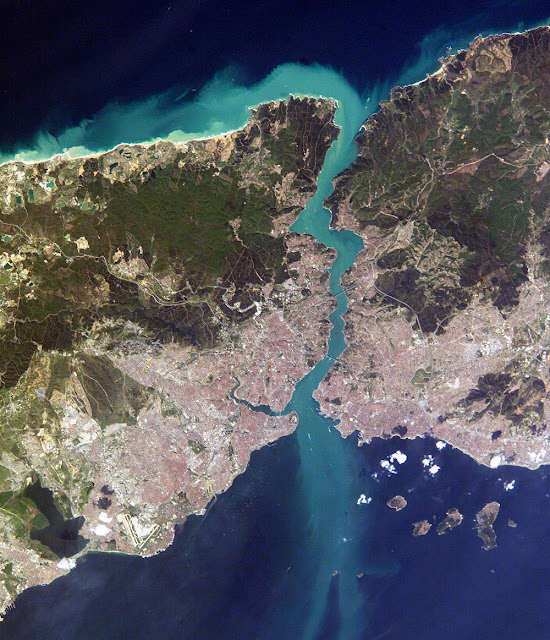 Answer:  it flows both ways.  Simultaneously, and all the time.
An excerpt from Noah's Flood: the New Scientific Discoveries about the Event that Changed History, by William Ryan and Walter Pittman (1998).

"... as far back as the Persian invasions of Byzantium in the early seventh century, there had been knowledge of another current flowing in the opposite direction to the surface current and lying below it... when the Byzantine emperor Heraclius crushed the invaders from Asia Minor, he flung the torso and head of his foe separately into the Bosphorus.  The bloated torso floated and drifted south in the surface current.  The head sank directly to the bottom.  Months later teeth washed ashore in gravel bars to the north."

Finding those teeth would be indirect evidence of course, but in modern times, local boatmen know that the surface current flows south into the Sea of Marmara and thence into the Aegean/Mediterranean.  If they want to take a boat north, they can lower a bucket of rocks on a long rope to the bottom, where the northward current of seawater is located; it will carry the bucket north and thus tow their boat on the surface.
More about this book later; just wanted to drop this tidbit into the blog now.  Satellite photo from NASA Earth Observatory.
Addendum: Just found this -

British scientists have discovered a 115-feet deep river, more than half a mile wide - at the bottom of Black Sea. The flow - carrying highly salty water and sediment - is 350 times greater than the Thames, according to a Leeds University team who used a robotic submarine to scan the seabed near Turkey.

The source at OneIndia says that the size of the flow would make it the sixth largest river in the world.