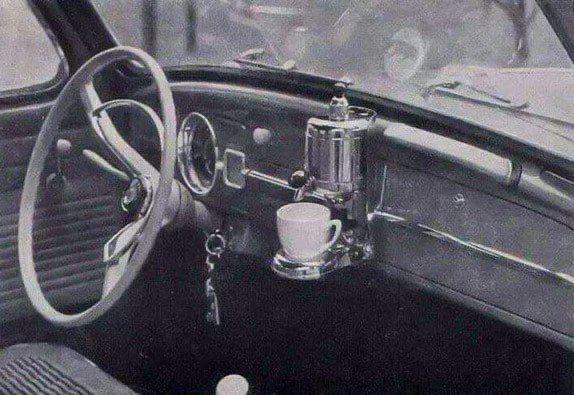 Coffee maker as an optional extra in 1959 Volkswagens.  Some relevant discussion here.

Addendum:  A tip of the blogging hat to reader Kolo Jezdec, who found an article in The Drive about a man who located and purchased one of these vintage items.

"... scant information survives about the Hertella Auto Kaffeemachine. There's at least one brochure online in German—in fact, that's one of the few images of the pot that floats around the web—and not much else... the unit was shipped to the U.S. all the way from Serbia... 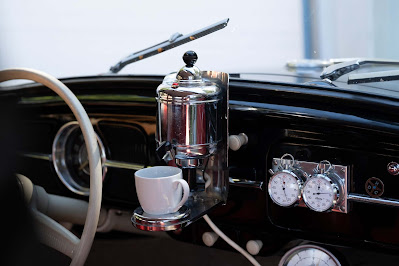 "I always thought they were a percolator, or espresso machine like a Moka… but nope," he said. "I have no instructions, so can only tell you what I’ve determined on my own. You fill the vessel with water, put your coffee in the (double layer) screen, and heat up the unit. I presume you heat the unit up with the coffee in it, which means this basically brews coffee as though it’s tea."
But while the coffee quality may not be great, the machine does have a few clever features. The porcelain cups that came with it apparently had a metal disc on the bottom of them that allowed them to stick to the machine magnetically. It also mounts to the dash with a simple bracket, allowing for the pot to quickly be removed and cleaned when necessary.
The rarity of these things is really the cool factor here, though. Hord tells me he's only ever seen six of these machines for sale in the three years he's searched for them. And as far as we know, that's how many exist today."