Meriwether Lewis carried an air rifle to the Pacific

In 2010 reader Mikeb302000 sent me a link to the very interesting video above.  The presentation comes from the National Firearms Museum, and provides details about the Girandoni air rifle, manufactured in the 1790s by Austrians and used in European wars.  A rifle similar to the one depicted was carried on the Voyage of Discovery by Lewis and Clark across the Louisiana Purchase to the mouth of the Columbia River.

I found more information at Guns.com:


The Livrustkammarne Museum in Stockholm is home to the earliest example of a mechanical air gun dating back to 1580... The Girandoni was the first pneumatic rifle and first repeating rifle ever used in warfare and it was special issue for the Austrian Army from 1780 to 1825...

And believe it or not it was a stone cold killer at up to 100 yards, able to punch a hole in a 1 inch pine board for the first 30 shots on a single air reservoir. The power dissipated and required a ‘pump up’ after that but the gun was miles ahead of anything seen thus far...

My initial scepticism of these weapons was fuelled by the misconception that they were similar to a Daisy BB gun. When I realized that the Girandoni propelled a .46 calibre ball through a rifled barrel at a muzzle velocity of 900 fps, I realized how wrong I had been. Providing a high rate of fire, there was no smoke from propellants nor muzzle flash to reveal ambush positions nor concern for inclement battle conditions as you needn’t worry about keeping powder dry.

This has permanently changed my concept of "air rifles."  I never owned an air rifle; my first weapon was a .22 caliber conventional rifle, and like most Americans, I conflated an "air rifle" with a BB gun, a mental image formed by repeated viewing of A Christmas Story - 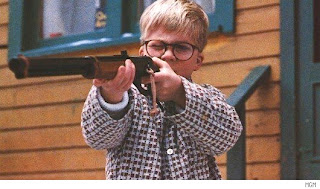 The Red Ryder BB gun was prominently featured in A Christmas Story, in which Ralphie Parker requests one for Christmas, but is repeatedly rebuffed with the warning "You'll shoot your eye out". The movie's fictional BB gun, described as the "Red Ryder carbine-action, two hundred shot Range Model air rifle with a compass in the stock and this thing which tells time", does not correspond to any model in existence nor even a prototype; the Red Ryder featured in the movie was specially made to match author Jean Shepherd's story (which may be artistic license, but was the configuration Shepherd claimed to remember). However, the "Buck Jones" Daisy air rifle, immediately above the Red Ryder in the Daisy line, did have a compass and sundial in the stock, but no other features of the "Red Ryder" model. The guns and a stand-up advertisement featuring the Red Ryder character appeared in a Higbee's store window in the film, along with dolls, a train, and Radio Flyer wagons.

The Girandoni air rifle was most impressive firearm for its era.  Fully recharging the pressure chamber required up to 1500 strokes, but European armies carried spare pressure chambers.  The next step for me was to read a book about the Lewis and Clark expedition.  I chose the classic Undaunted Courage: Meriwether Lewis, Thomas Jeffeerson, and the opening of the American West, by Stephen E. Ambrose, (excerpts here).

Reposted from 2012 because I found this while searching for info on A Christmas Story.