This is how complicated modern farming can be - updated

From an excellent longread in the September issue of Harper's: 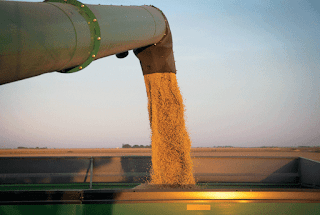 The combine continued along, following the contours of the planting lines automatically recorded months earlier by G.P.S. As we moved, our progress was charted on the touchscreen in varying colors to show where each row or part of a row was above or below the target for bushels-per-acre for this field. All of that data is recorded and stored to plan for next year, helping farmers decide how to adjust the density of their seed populations, where to apply fertilizer, how much to water, where to add inputs, and where to save money...


So to make your best profit on soybeans, you need a sunny day (but not too sunny) with a dry breeze (but not too dry), and you need that day to fall exactly when the plant has received the precise number of hours — yes, hours — of sunlight from the moment you planted it months earlier. To make hitting such a tight window even remotely possible, seed companies, like Rick’s supplier, DuPont Pioneer, have hybridized soybeans for nearly a century — and genetically modified them in recent decades — according to bands of latitude called maturity groups. They number these photoregions from 0 in the northern growing zones of Canada to 7 in the light-drenched flatlands of Florida. But Nebraska is almost exactly divided between groups 2 and 3, the line bisecting the state into north and south. Most farmers here, especially in central regions like York County, plant both varieties to spread out their risk, but some daring farmers like Rick will formulate a guess as to what the weather holds for the growing season and plant more of one group, hoping for higher yields and higher returns.

In 2014, after several years of drought, Rick bet on another dry year — and planted incredibly short-season beans. While most of his neighbors were planting 3.5s, Rick planted 2.4s. And he was dead-on, right up until the rains started...

In my mother's childhood, her dad planted seeds, harvested a crop and saved some of the seeds for the following year.  (No longer.  Most people know that seed-saving now can be punishable in a court of law.)  But what grandpa planted in Minnesota was probably the same seed that someone in Wisconsin or Illinois would plant.  What I learned from this article is how hyperspecialized the hybrids are now according to latitude of the field.  I found this map at a University of Missouri ag school website: 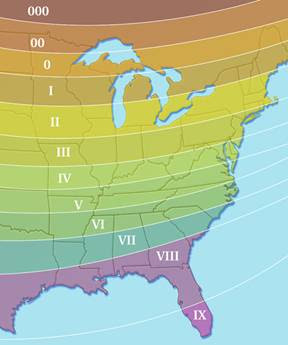 Although temperature affects soybean growth and development, soybean plants are also quite sensitive to photoperiod. The lengths of the light (photoperiod) and dark periods within a 24 hour day change each day. These changing photoperiods regulate the timing of flowering and other stages of soybean plant development. Soybean is classified as a short day plant because flower initiation is stimulated when photoperiod is shorter than a critical value. Critical values differ among varieties and are determined by a variety’s genes.

Photoperiod lengths differ among latitudes on any specific day. After the first day of spring and until the first day of fall, photoperiods are larger as latitude increases (further north). Because of soybean’s sensitivity to photoperiod, soybean varieties are assigned to one of 13 maturity groups. These maturity groups are adapted to relatively narrow bands of latitude. In North America, MG OOO is adapted to southern Canada; whereas, MG 10 (X) is adapted to Mexico and the Caribbean Islands.

(More at their link).   Now note - those are not microclimate zones like most people are familiar with for household gardens.  Those bands don't vary according to rainfall and max hot/cold - those are just daylight duration bands.  Other adjustments need to be made for local weather and climate.

It didn't surprise me to see an article in The Guardian this week entitled "Why are America's farmers killing themselves in record numbers?"


Last year, a study by the Centers for Disease Control and Prevention (CDC) found that people working in agriculture – including farmers, farm laborers, ranchers, fishers, and lumber harvesters – take their lives at a rate higher than any other occupation. The data suggested that the suicide rate for agricultural workers in 17 states was nearly five times higher compared with that in the general population.

After the study was released, Newsweek reported that the suicide death rate for farmers was more than double that of military veterans. This, however, could be an underestimate, as the data collected skipped several major agricultural states, including Iowa. Rosmann and other experts add that the farmer suicide rate might be higher, because an unknown number of farmers disguise their suicides as farm accidents.

Since 2013, net farm income for US farmers has declined 50%. Median farm income for 2017 is projected to be negative $1,325. And without parity in place (essentially a minimum price floor for farm products), most commodity prices remain below the cost of production.

In an email, Rosmann wrote, “The rate of self-imposed [farmer] death rises and falls in accordance with their economic well-being … Suicide is currently rising because of our current farm recession.”

More at the link.  Neither political party has effectively addressed the farm recession in this country.  National politicians tend to equate American economic prosperity with a rise in the Dow Jones Industrial Average.

I've often wondered what modern GPS-equipped tractors and combines cost to purchase or lease.  Perhaps some reader will know.

Enough for now.  Got to move on.

Addendum:  A report today about how high winds combined with hybrid crops can result in "ear drop" -


But the corn had snapped from its stalks and fallen to the dirt days earlier, the result of what agriculture experts called a perfect storm: A series of weather conditions over the growing season that had been good, and then bad, for certain hybrid seed varieties, producing big-kerneled ears but weakening their grip to the stalks...

In Makovicka's most damaged field, he counted 70 bushels of corn per acre — grain he couldn't salvage, couldn't sell at the elevator. Rees has heard of northeast Nebraska farms that lost 100 bushels per acre, or nearly $50,000 of missed income on each quarter-section...

The problems will extend beyond harvest. Many growers will be forced to pay for more herbicide, when the corn they couldn't harvest this year sprouts among their soybeans next year. Some farmers who graze their cows in harvested fields are realizing, after it's too late, that their animals are gorging on more corn than their bodies can handle.

“I'd never had a problem and I've been doing it for 30 years,” said Steve Wenz, who farms near Firth. “I put them out on a Tuesday morning and, Thursday morning, I had three dead ones.”..

During pollination, high heat weakened the shanks — the tie between the corn and the stalks — and cool August temperatures resulted in bigger ears. “They produced really heavy kernels, really deep kernels. There was quite a bit of weight.”

October rains contributed to stalk rot, followed by the damaging winds... Certain seed varieties proved more vulnerable than others, and the loss varied from farm to farm, even from field to field.

In some cases, attempts were made to harvest the fallen ears by hand: 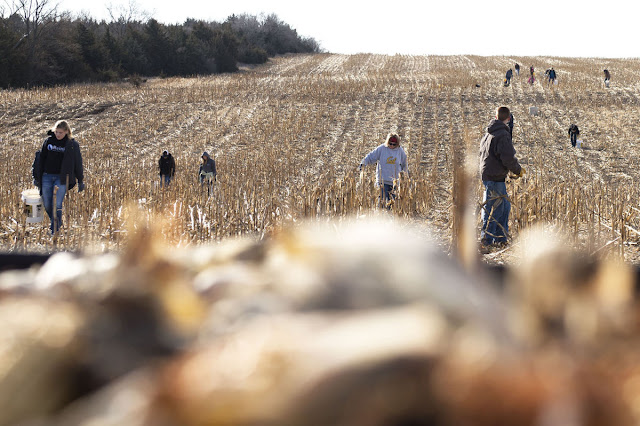