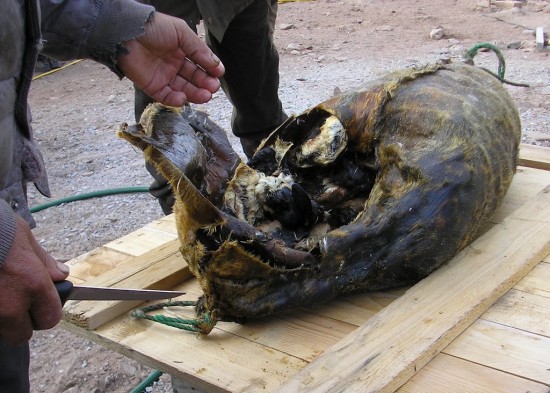 Here are excerpts from a report in the BBC's Food Blog in 2010:


The delicacy is created by first preparing a seal skin: all the meat is removed and only a thick layer of fat remains. The skin is then sewn into a bag shape, which is stuffed with 300-500 little auk birds. Once full and airtight, the skin is sewn up and seal fat is smeared over all over the join, which acts as a repellent to flies. The seal skin is then left under a pile of rocks to ferment for a minimum of three months to a maximum of 18 months.

As winter arrives and hunting for other game becomes difficult due to the darkness and unsafe ice, Ikuo and his family look forward to digging out the kiviaq and sharing it with their family and friends. They always eat it outside as the smell is so overpowering that it would linger inside the house for weeks. The seal fat helps to both preserve and tenderise the bird meat so it can be eaten raw and whole, bones and all. It was quite a sight to see the family holding bird’s legs in their teeth and stripping off the feathers before chowing down on large parts of the bird.

And here's a video of the auks being cleaned for consumption -

The knee-jerk reaction is that the Inuit are comsuming "rotten" meat, but that is certainly an oversimplification.

When kiviaq is prepared, the meat of the seal was removed, leaving only a fatty bag; then the BBC description describes the sealskin as "airtight," and the Wikipedia entry says "as much air as possible is removed from the seal skin, which is then sewn up and sealed with grease, with a large rock placed on top to keep the air content low."

So what the Inuit are doing is storing the bird carcasses in what effectively becomes an anaerobic environment, and the birds would then undergo fermentation.  The other variable must be the subarctic climate of Greenland.  At Food Lorists I found a comment that the kiviaq is buried in permafrost before being compressed by the rock, so perhaps the low ambient temperatures modify or inhibit the bacterial flora in some way to minimize the risk of the production of botulinum toxin.

This is most interesting way to prepare food.  It's probably the end result of several millennia of trial and error (the latter leaving behind a smattering of dead Inuit).  If someone reading this blog can explicate more on the food chemistry (or find relevant links in this regard, I - and other readers - would be most appreciative).

Top photo and video via Oddity Central and Neatorama.

Reposted from 2012 to accompany the adjacent post about lutefisk.