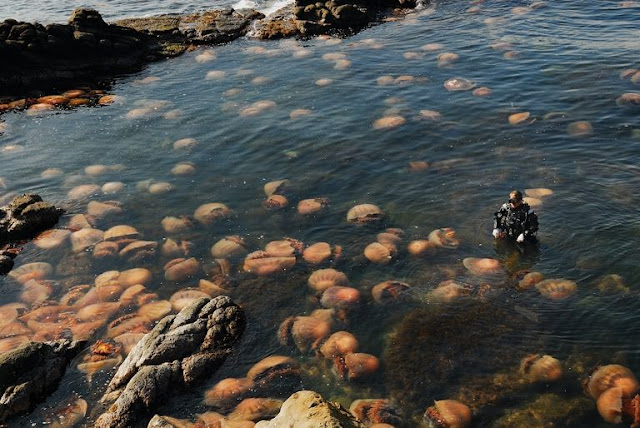 Jellyfish have been referred to as the "cockroaches of the sea," with reference to both species' ability to survive under the harshest conditions.  An article in the newest edition of The Atlantic reviews a new book about jellyfish:


Their delicacy notwithstanding, in recent decades jellyfish species have come to be thought of as the durable and opportunistic inheritors of our imperiled seas. Jellyfish blooms—the intermittent, and now widely reported, flourishing of vast swarms—are held by many to augur the depletion of marine biomes; they are seen as a signal that the oceans have been overwarmed, overfished, acidified, and befouled... The vision—hat tipped to science fiction—is of the planet’s oceans transformed into something like an aspic terrine. In waters thickened by the gummy mucus of living and dead jellyfish, other sea life will be smothered. Because jellyfish recall the capsules of single-celled protozoa, this eventuality invites portrayal as a devolution of the marine world—a reversion to the “primordial soup.”..

Perhaps the most complex issue Berwald takes on is jellyfish blackouts. Sweden, Scotland, the Philippines, Tokyo, California, and Israel have all suffered intermittent electrical outages caused by jellyfish sucked into the intake pipes and cooling systems of coal-fired and nuclear power stations... In Spineless, Berwald travels to Spain’s Murcia region and takes us to the Mar Menor lagoon, which had become so jellified in 2002 that “you couldn’t drive a boat through the water.” Here barrel and fried-egg jellyfish are pernicious—so much so that they’re removed from the sea by the bargeload and dumped into ditches near the airport.

More at that link. Then today I found a report of jellyfish menacing Chinese aircraft carriers:


In 2006, the aircraft carrier USS Ronald Reagan was incapacitated while visiting Brisbane, Australia due to blubber jellyfish swarms. Reportedly, cooling pipes for the ship’s nuclear reactor were clogged with the foot-wide jellies, necessitating an evacuation of the carrier...

Ironically, the jellyfish problem is partially of China’s own doing. As many as one hundred million sharks are killed each year, much of it in the form of bycatch in an attempt to catch other forms of seafood but also for shark’s fin soup, a delicacy in China. Although demand for the soup has declined in recent years, the shark population is still way down. Sharks are a major predator of jellyfish and scientists believe their absence is a major reason why jellyfish populations have exploded.

Related: Your children will eat jellyfish for dinner.