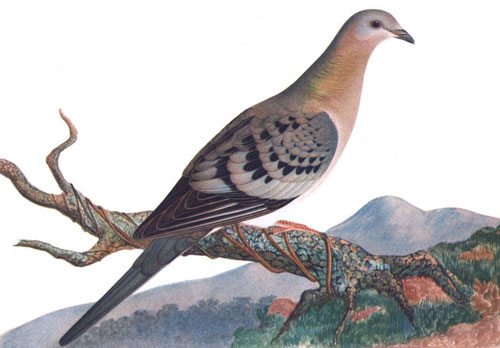 In the autumn of 1813, I left my house at Henderson, on the banks of the Ohio River, on my way to Louisville... The air was literally filled with pigeons; the light of noonday was obscured as by an eclipse; the dung fell in spots, not unlike melting flakes of snow, and the continued buzz of wings had a tendency to lull my senses to repose.

Before sunset I reached Louisville, distant from Hardinsburgh fifty-five miles. The pigeons were still passing in undiminished numbers and continued to do so for three days in succession. The people were all in arms. The banks of the Ohio were crowded with men and boys incessantly shooting at the pilgrims, which there flew lower as they passed the river. Multitudes were thus destroyed...

It may not, perhaps, be out of place to attempt an estimate of the number of pigeons contained in one of those mighty flocks, and of the quantity of food daily consumed by its members. The inquiry will tend to show the astonishing bounty of the great Author of Nature in providing for the wants of His creatures. Let us take a column of one mile in breadth, which is far below the average size, and suppose it passing over us without interruption for three hours, at the rate mentioned above of one mile in the minute. This will give us a parallelogram of 180 miles by one, covering 180 square miles. Allowing two pigeons to the square yard, we have 1,115,136,000 pigeons in one flock. As every pigeon daily consumes fully half a pint of food, the quantity necessary for supplying this vast multitude must be 8,712,000 bushels per day...

Let us now, kind reader, inspect their place of nightly rendezvous... The dung lay several inches deep, covering the whole extent of the roosting place, like a bed of snow... As the period of their arrival approached, their foes anxiously prepared to receive them. Some were furnished with iron pots containing sulphur, others with torches of pine knots, many with poles, and the rest with guns.. Suddenly there burst forth a general cry of “Here they come!” The noise which they made, though yet distant, reminded me of a hard gale at sea passing through the rigging of a close-reefed vessel. As the birds arrived and passed over me, I felt a current of air that surprised me. Thousands were soon knocked down by the pole men. The birds continued to pour in. The fires were lighted, and a magnificent as well as wonderful and almost terrifying sight presented itself. The pigeons, arriving by thousands, alighted everywhere, one above another, until solid masses as large as hogsheads were formed on the branches all round. Here and there the perches gave way under the weight with a crash and, falling to the ground, destroyed hundreds of the birds beneath, forcing down the dense groups with which every stick was loaded. It was a scene of uproar and confusion. I found it quite useless to speak, or even to shout to those persons who were nearest to me. Even the reports of the guns were seldom heard, and I was made aware of the firing only by seeing the shooters reloading.

No one dared venture within the line of devastation. The hogs had been penned up in due time, the picking up of the dead and wounded being left for the next morning’s employment. The pigeons were constantly coming, and it was past midnight before I perceived a decrease in the number of those that arrived... Toward the approach of day, the noise in some measure subsided, long before objects were distinguishable, the pigeons began to move off in a direction quite different from that in which they had arrived the evening before, and at sunrise all that were able to fly had disappeared. The howlings of the wolves now reached our ears, and the foxes, lynxes, cougars, bears, raccoons, opossums, and polecats were seen sneaking off, while eagles and hawks of different species, accompanied by a crowd of vultures, came to supplant them and enjoy their share of the spoil.

It was then that the authors of all this devastation began their entry among the dead, the dying, and the mangled. The pigeons were picked up and piled in heaps, until each had as many as he could possibly dispose of, when the hogs were let loose to feed on the remainder.

Persons unacquainted with these birds might naturally conclude that such dreadful havoc would soon put an end to the species. But I have satisfied myself by long observation that nothing but the gradual diminution of our forests can accomplish their decrease.

The latter proved to be a prescient comment.  The last known passenger pigeon died in 1914, as a result of combined predation and habitat loss.

Addendum: Reposted from 2013 to add some salient paragraphs from an essay in Harper's Magazine (November 2015) entitled "Rethinking Extinction: Toward a less gloomy environmentalism" -


The birds that most of us eat today are chickens — lots of them — and turkeys, with the occasional duck, quail, or pheasant thrown in. So it is something of a shock to remember that, not so long ago, Americans were happy to eat just about anything with wings. An 1867 inventory of fowl available in the game markets of New York City and Boston featured not only wild turkeys, partridges, and grouse but also robins, great blue herons, sandpipers, meadowlarks, blue jays, and snow buntings.

In season, passenger pigeons were especially plentiful. Alexander Wilson reported they were sometimes eaten for breakfast, lunch, and dinner. The pigeon potpie — sometimes garnished with pigeon feet stuck in the middle — was common fare in colonial America. Passenger pigeons were preserved for out-of-season consumption by being salted, pickled in apple cider, smoked to make jerky, or sealed in casks with molten fat.

According to Schorger, the birds were “a boon to the poor”: in 1754, a half dozen sold in New York for a penny, a sum equivalent to thirty cents today. In times of surplus, they were fed to hogs.

By the middle of the nineteenth century, railroads had connected the cities of the eastern seaboard to the great nesting colonies of the Midwest. Word of the flocks’ locations spread rapidly thanks to another new technology, the telegraph, which allowed professional market hunters, as well as local amateurs, to converge on a site.

The most common way to kill passenger pigeons was to shoot them. Because the birds clustered so densely, no great skill was required to blast them from trees or out of the sky with a shotgun. Nets were widely used as well. Trappers broadcast grain and deployed captive “stool pigeons” to attract the birds, enabling them to snare hundreds at once. Captured pigeons could be killed by crushing their skulls between the thumb and forefinger, though, as Schorger notes, “It was difficult to continue this method without fatigue when many birds were handled.” Some hunters used specially designed pliers to break the birds’ necks. Others used their teeth...

Continued at the link.