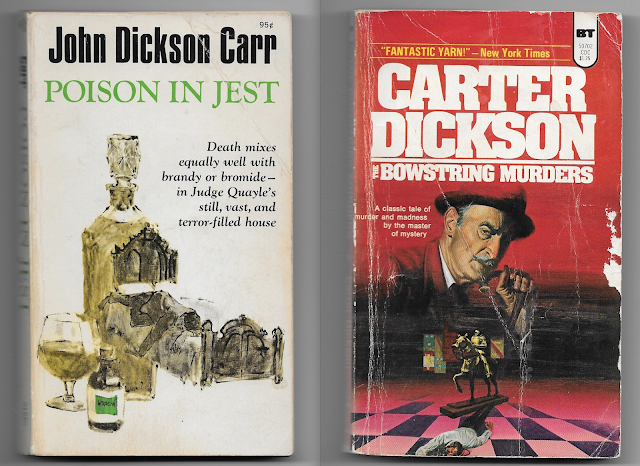 Continuing my re-reading and reviewing of the mysteries of John Dickson Carr, we move now from the Henri Bencolin novels to the "other detectives."

In the 1930s, Carr seems to be searching for a proper identity for his detective.  He leaves behind Henri Bencolin, and in the space of the next five years will test out five other personas - ending up, of course, with his iconic Gideon Fell and Sir Henry Merrivale classics.


"Poison In Jest" introduces Rossiter, a clownish but insightful problem-solver, who incorporates an element of humor that seems to serve as a counterbalance to the grimness of this novel (this "goofiness" quality will be developed more fully by Carr with his later detectives).  This is Rossiter's only novel.

As always I won't offer any spoilers regarding the plot.  It involves a deeply dysfunctional family, resulting in serial poisonings in a country estate.  Frankly, it's a rather routine mystery story, solved mostly by analysis of psychology of the family rather than by analysis of the clues.  One saving grace for the story was that the malefactor was the very last character I would have suspected of being the murderer.

So we turn now to the language and the "things you wouldn't know" material in the book.  There were not many clever turns of phrase, although I liked "It had that air of secrecy belonging always to the rooms of those who live alone; of small trinkets jealously massed..."


"I can see him, gaunt and smelling of bay rum, stalk the brown library while he talked."  [Bay rum is an aftershave lotion made by distilling leaves of bayberry with rum.]

"Through them would always blow the wind of stagecoaches, and the note of the key-bugle from the great days of the National Highway..."  [from Britannica: "In 1810 Joseph Halliday patented the key bugle, or Royal Kent bugle, with six brass keys (five closed, one open-standing) fitted to the once-coiled bugle to give it a complete diatonic (seven-note) scale. It became a leading solo instrument in military bands until replaced by the cornet.]

"She was flustered, trying to arrange her hair unnecessarily and acutely conscious of her swollen eyelids.  She tried to grow arch.  "Imagine seeing you, of all people!" ["cunning, sly, roguish, mischievous" - not sure how the word came to mean that].

"...you may see barges crawling on an oily Danube, where the shields of Rome came, and Bonaparte's sharp-clawed eagles, and hair-and-steel Crusaders moving under scarlet crosses to the Black Sea." [I have absolutely no idea what he's referring to.  Anyone?]

"A brand stirred uneasily in the fireplace; rustled, and fell." [A word one doesn't see much nowadays since monster-hunts have gone out of fashion, obviously referring to a burning piece of wood.  Apparently the word "brand" is related to "burn" and a trademark "brand" may have been something originally etched into products]. 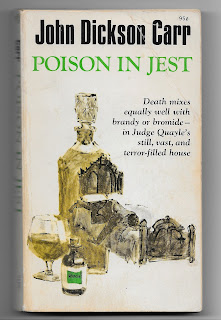 "Holding out on you?" yelped Reed.  "Me? Why, damn your pictures, Joe Sargent, you've got a nerve..." [In the context of the story this exclamation had nothing to do with actual pictures.  I presume it was an expostulation briefly popular in the 1930s, maybe related to some movie or story.]

"This naturally led to a discussion of the Borgia..." [This phrase was repeated the same way a couple times in this novel about poisoning.  Interesting that it's not "the Borgias" but "the Borgia" singular.  It clearly implies family, but one doesn't refer to "the Kennedy" or "the Roosevelt."]

"In the embrasure of a high window..." [In fortification, an opening through which missiles may be discharged, from French "to widen."  The term has been used in dentistry to refer to the space between teeth.]

"The reply was beribboned, but it was none the less a whip.  For the first time (and heaven knows why) he had really infuriated the county detective." [unusual use of the term]

"I stumbled across the room, struck a match, and lighted the three mantles in the chandelier." [I had to look this up.  "Mantle" in general is something that covers (from Latin for "cloak.")  In a chandelier, a mantle would be an incombustible cover for a gas jet. So I guess technically you're not lighting the mantle...]


HAMLET Madam, how like you this play?
QUEEN The lady doth protest too much, methinks.
HAMLET O, but she’ll keep her word.
KING Have you heard the argument? Is there no offense in ’t?
HAMLET No, no, they do but jest, poison in jest. No offense i’ th’ world.

"...the judge was on his uppers." [new to me, but I found it as the last definition of upper in my dictionary: "Informal. reduced to poverty"]


Next is The Bowstring Murders (with this work Carr introduced his alternative pseudonym of Carter Dickson).  Another new detective - John Gaunt - makes his appearance and then as far as I remember, will make his exit stage left never to reappear.  The plot involves a series of murders in an old family estate (castle).  A much unloved man is found in his armory with a crossbow bowstring knotted about his neck.  Then a second death, and a third.  Carr uses the novel to have his protagonist discuss some of the tricks of the sleuth/novelist trade - lying and detecting lies, hiding things, etc.  One thing that is lacking is a floor plan of the castle, since the solution depends on where various rooms are.

The first time I read this book, I wrote on the flyleaf "easy," but it wasn't easy this second time twenty years later.  I was not able to predict the method or the motive, and the murderer was not among my first three choices.  *sigh*

So - on to the language and things-you-wouldn't-know:


This phrase has a certain truth to it: "The clock boomed, and went on leisurely beating out the hour of nine.  They all listened to the strokes - having the dim idea, as people will, that it may hit more than the indicated number."

Billycock hat. ["This was a popular nickname for the Bowler hat in the nineteenth and early twentieth centuries. The name, and indeed the hat, originated in England at Holkham in Norfolk. It  was intended as a practical version of the top hat for use by gamekeepers on the estate."]

Ulster. [The Ulster is a Victorian working daytime overcoat, with a cape and sleeves. It is often seen in period productions of Victorian novels.]

"glass cases of racks containing swords - broadsword, claymore, basket-hilt, estoc, schiavona, and cup-hilted rapier..." [The claymore was a medieval two-handed sword, the word being an anglicization of Gaelic for "great sword." The estoc is a longsword designed to fight against armor.  Schiavona was Renaissance, name derived from Slavs.]

"... the Norman chain-mail and the Gothic plate, the tilting-heaume and the morion..." [Heaume = helm(et).  Morion also a helmet] 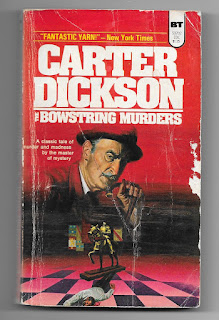 "The walls were very thick, and the windows had their mullioned panes stamped with the Rayle arms..." [A mullion is a vertical division between divisions of a window or door. "In Gothic architecture windows became larger and arrangements of multiple mullions and openings were used, both for structure and ornament. This is particularly the case in Gothic churches where stained glass is set in lead and ferramenta between the stone mullions. Mullioned windows of a simpler form continued to be used into the Renaissance and various Revival styles."]

"a suit of what is called half-armor, of the middle seventeenth century, extending not far below the waist in steel skirts called vambrances" [web page here, though they appear to be more associated with arms than with legs]

"... a shaken Mephistopheles, with hair as heavy as a casque..." [An open, conical helmet, or any helmet-shaped head-covering, from Spanish word for helmet]

"plashing of a waterfall" [used several times in place of "splash."  My dictionary suggests the word is "probably of imit. orig."]

"But I want you to be sure without it, because it might merely be suggestion, and then I should be no forrader." [Meaning in context "no further forward." Not in my Random House dictionary or in my OED.  I've seen the word used in this context in other novels, usually spoken by an uneducated person but in this story that's not the case.]

"He poured out a drink, and at Sir George's frown he held up the glass to him, said, "Slog Tabs!" and took a deep pull." [I think this was repeated a second time in the book, so it's not a typo.  The "Tabs" is capitalized.  Google has no citations.  It probably is a colloquial (and transient) toast from the 1930s.  Has anyone heard of it???] [Addendum - multiple ideas and a likely explanation in the Comments to this post].

"I was trimming the bart at billiards."  [I can't find anything]

"Let's avoid the suggestion of a bally row, shall we?" [all I can find is that it might be British slang euphemism for "bloody."]

"With one gloved hand he dived behind the body, and produced a small revolver with a goat's foot trigger..." [Google associates goat's foot with crossbows, but not with guns]