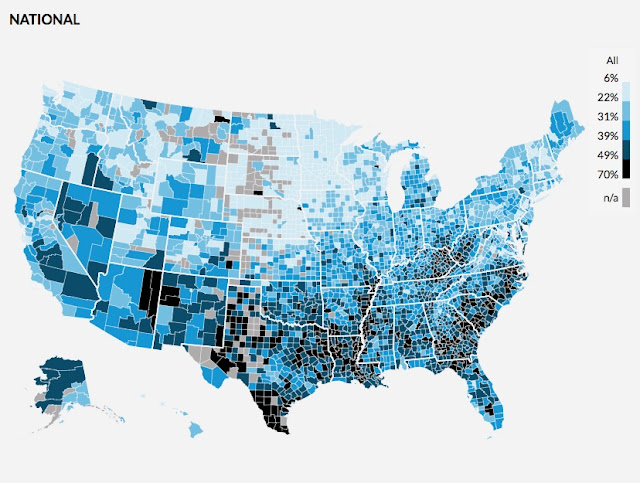 Not the "national debt," but the debts of individual Americans, as depicted on this map (my embed is a screencap - the interactive version here lets you zoom in on your state and your county for data).


2016 data derived from a random sample of deidentified, consumer-level records from a major credit bureau, as well as estimates from summary tables of the US Census Bureau’s American Community Survey (2015 or 2011–15)... Debt in collections includes past-due credit lines that have been closed and charged-off on their books as well as unpaid bills reported to the credit bureaus that the creditor is attempting to collect.

Links to various commentaries at Digg.  My attention was drawn to Minnesota...


A previous analysis by the Urban Institute focused on medical debt, and found one reason it was so concentrated in the South was because the uninsured rates tended to be higher. While that changed to some extent with the Affordable Care Act, many Southern states chose not to expand Medicaid. On the other hand, Minnesota — which has the lowest rates of debt — has one of the most generous Medicaid programs in the country, and a more inclusive and higher-quality health care system. ...only 3% of Minnesotans have medical debt in collections, and only one county (rural Clearwater County) has medical debt rates over 11%.

Compare that picture to the state of medical debt in the rest of the country. Nationwide, 18% of people have medical debt in collections, and, as CityLab noted, much of that debt is concentrated in states that chose not to expand Medicaid under the ACA.

Most Washington politicians are tone-deaf to the financial crises experienced by so many Americans.  They are busy waging their internecine battles, meeting with lobbyists, and pandering to their donors.