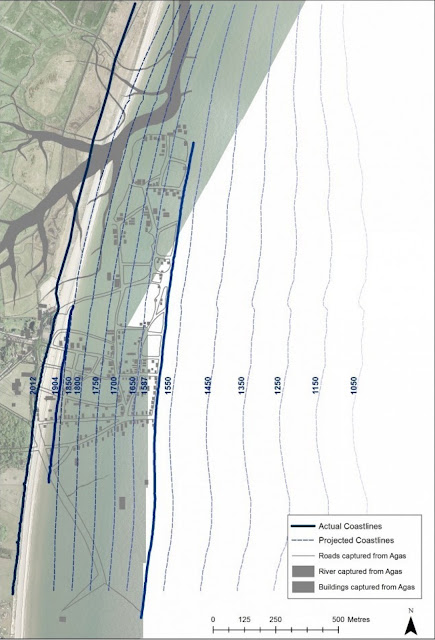 Coastal erosion has dropped most of the city of Dunwich into the sea.


Beyond the faded town and crumbling cliffside, past the skeleton of a long-abandoned church that was itself just one strong storm away from tumbling into the water, through the sand and scrubby sea grass and under the waves, lay the remains of a British Atlantis. There were shipyards and guild halls, mansions and market squares, two friaries, six or seven churches, an untold number of homes. Sear, a small child on vacation with his family, would perch on the ruins of the old church and listen for the bells that people said could still be heard tolling from the city’s submerged steeples...

Once among the most important cities in England, Dunwich was the victim of ferocious storms that lashed Britain’s eastern coast as Europe’s climate cooled going into the period now known as “the Little Ice Age.” Sonar maps, sediment samples and contemporary accounts revealed how the successive storms eroded the cliff the city once stood on, destroyed its economy and ultimately demoralized its inhabitants so thoroughly they all moved away.