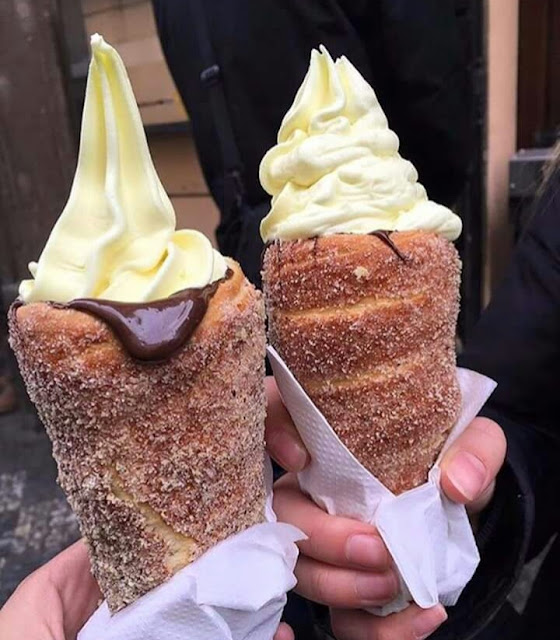 These are Trdelníks. They are tubes of sweet bread cooked over fire with sugar and cinnamon on the outside. The picture shows what some trendy new places have done, which is turn them into cones and fill them with stuff (some have meat and cheese in them). Saw the non-ice-cream-cone version all over Prague at Christmas markets, and saw a store in the touristy section selling exactly what is in the picture.

More at the Reddit discussion thread.  And this from Wikipedia:


Trdelník is a traditional Slovak cake and sweet pastry, originally coming from the Hungarian-speaking part of Transylvania, Romania. It is also known within the culinary heritages of other European countries like Hungary, the Czech Republic and Austria. It is made from rolled dough that is wrapped around a stick, then grilled and topped with sugar and walnut mix. Nowadays, trdelník is very popular among tourists as a sweet pastry in Slovakia and the Czech Republic.The name trdelník comes from trdlo, the wooden stake the cake is wrapped around for cooking which gives it its traditional hollow shape.

At the link are a list of similar products from other European countries, including Swedish spettekaka.