A downturn in the economy is necessitating widespread slaughter of thoroughbreds and other horses.  The BBC explains -


To keep up with this new demand, thoroughbreds - a breed of horse used specifically for racing - were being produced at an unprecedented rate: between 2000 and 2007, the number of registered foals increased from 8,793 to 12,633.

But these horses are expensive, costing approximately 17,000 euros (£15,000) a year to keep. And when Ireland plunged into one of the deepest recessions to hit the eurozone, they became a luxury very few could afford. 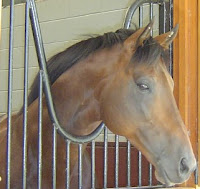 Mr Hogan, who is based in Nenagh, County Tipperary, explains: "Quite a lot of those horses would have been owned by syndicates - basically blocklayers, carpenters, electricians - people involved in the big property boom. And they just disappeared overnight."..

And abattoirs, where horses are slaughtered for their meat for human consumption, have become a growth industry. In 2008, there was just one in the Republic of Ireland, but today there are five. Last year, 9,790 horses were killed in them. Of these, the BBC has learnt that 4,618 were thoroughbreds.

But this is not the whole picture. Figures are not available for the number of horses that have ended up in Ireland's 40 registered knacker's yards...

But racehorses are the tip of a much larger equine welfare problem in Ireland. At the ISPCA's animal rescue centre in Keenagh, County Longford, they are struggling to cope with the numbers of horses they have had to take in. "We're seeing every shape and size, from little ponies right up to cobs and draught horses," says Conor Dowling, the ISPCA's chief inspector. "So far this year, our inspectors have taken in nearly as many equines as we did in the entire year of 2010."

"And abattoirs, where horses are slaughtered for their meat for human consumption..." I presume this means the horse meat is shipped to other countries where it is consumed by humans.  I think this may be a topic for a separate post in the future.