The most segregated large cities in America 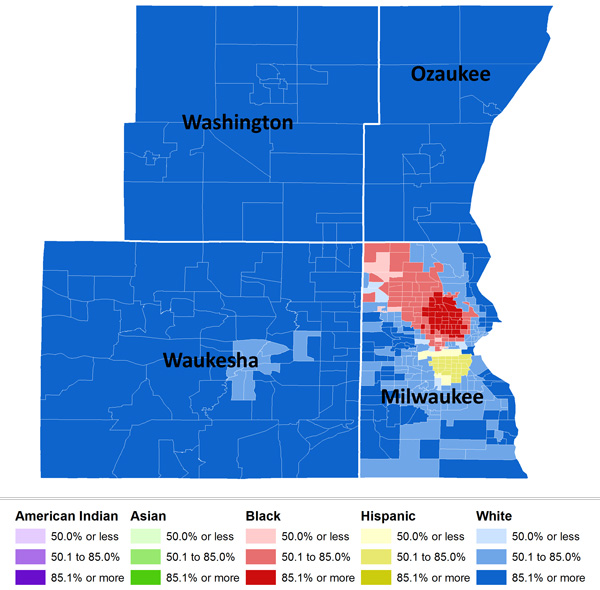 Salon has an article with a slide show of quite interesting maps of the ten most segregated large (>500K) cities in America.  Counting up from #10:  Los Angeles, Philadelphia, Cincinnati, St. Louis, Buffalo, Cleveland, Detroit, Chicago, New York, and (perhaps surprisingly) Milwaukee.


The rankings are based on a dissimilarity index, a measure used by social scientists to gauge residential segregation. It reflects the number of people from one race -- in this case black or white -- who would have to move for races to be evenly distributed across a certain area. A score of 1 indicates perfect integration while 100 signals complete segregation. The rankings were compiled by John Paul DeWitt of CensusScope.org and the University of Michigan's Social Science Data Analysis Network.

Each city is discussed separately; here is some of the discussion re Milwaukee:


"Most of our history is very similar to Chicago, Cleveland or even Baltimore," says Marc Levine, professor of history and economic development at the University of Wisconsin, Milwaukee. "Every place has had the zoning ordinances, then restrictive covenants, the practices of realtors. The standard history. What makes Milwaukee a little bit different than these other places... We have the lowest rate of African-American suburbanization of any of these larger cities."..

If you're wondering if this can somehow, some way, be blamed on union-busting Wisconsin Gov. Scott Walker, the answer is yes. Walker took the lead in a campaign against public transit to connect the suburbs to the city during his time as county executive. He thought the funds would be better spent on highways.

"There is virulent opposition in these exurban counties to any kind of regional transit system, particularly a regional rail system. There have been proposals over the years, but they're always DOA," says Levine. "Governor Walker's big issue as state representative and county executive was 'Over my dead body light rail,' and he fought with Milwaukee's mayor over funds for regional rail. He very much represents that suburban and exurban base."

I haven't read the discussions of the other cities; I expect there is much to learn from the maps and analysis.  And I wish a similar set of maps would be generated for the ten most-integrated large cities in America; I wonder which ones they would be.