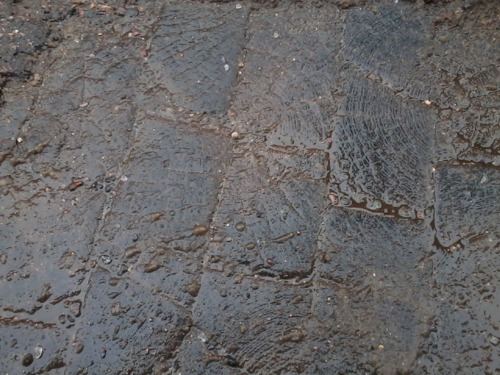 From the tumblr of the Hennepin County (Minneapolis) library, via Stuff about Minneapolis:


Here is a wintry photo (please excuse the slush) of the oldest street surface in downtown Minneapolis. It is a piece of 8th Avenue North just south of Washington Avenue North. Before there was concrete, asphalt or cobblestones, downtown Minneapolis was paved with creosote soaked wood blocks. You can see the tree rings in the blocks.

This is interesting, though not rare.   A  brief search yielded similar streets in Philadelphia (Camac Street); Willliamsport, Pennsylvania; Pittsburgh, Pennsylvania (where flooding caused the blocks to swell and "burst"; Baltimore, Maryland; Victoria, British Columbia; and Berlin, Germany (and undoubtedly many hundreds more).*

The technique and technology of wood block paving is discussed at Kaswell Flooring Systems:


Timber blocks had been used as paving as early as the fourteenth century in Russia. Wood block pavements were laid in New York and Philadelphia about 1835, in England about 1838, and in Paris about 1880. The first blocks were round or hexagonal, and many different types of wooden pavements were patented between 1840 and 1913...

[In Dallas, Texas] the first blocks, which were twelve inches long and irregular in shape, were laid down without any foundation in the virgin soil, and they began to sink, each to a different depth. "About the roughest thoroughfare in the world resulted," recalled one man. "Going over it in a vehicle was as wearing as riding a camel, and the people began to beg the City Council to give them back the original black, waxy mud." Trial and error disclosed that the wooden blocks worked better if cut into uniform eight to ten inch sections and spread on a bed of six to eight inches of gravel. The spaces between the blocks were packed with sand and then covered with coal tar or pitch...

The decay of wood paving blocks is due to fungi, produced by heat, air, and moisture. Creosote, obtained by distilling coal tar, wood tar, or water-gas tar, was used to preserve the wood, especially when the blocks were to be installed in wet areas. The success of a wood pavement depends on the quality of the creosote oil, not only to preserve the wood but also so that it will neither expand nor contract...

On the subgrade, a concrete foundation was poured. A thin cushion of sand or mortar was placed on the concrete to seat the wooden blocks, which were laid with no joint more than 0.125 inch, using nothing but whole blocks. After the blocks were placed, they were rolled by a steam roller until the surface was smooth and brought to grade and contour of the finished pavement. After the blocks were thoroughly rolled, a fine sand, cement, or bituminous (coal-tar pitch, asphalt, etc.) material was used to fill the joints...