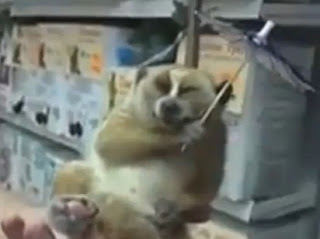 From an article at The Independent:


A video of [a slow loris] being tickled has gained more than six million views. A new clip, posted this month, in which a loris clutches a cocktail umbrella, has been viewed two million times...

Poachers steal infant lorises from their parents in the wild to sell at open-air markets in Indonesia, where they are traded for as little as £10. The export market is most lucrative in Japan, where lorises stolen to order sell for £3,500. The trade is now expanding into the US and Europe...

But many do not survive the journey. "The only reason the loris isn't biting the person holding it in the video is because it has had its teeth ripped out with pliers," said Chris Shepherd of Traffic Southeast Asia, which campaigns against the trade in primates.

The teeth are removed because the loris, listed as vulnerable to extinction by the International Union for Conservation of Nature, can deliver a toxic bite. Mr Shepherd said: "The creature is then effectively doomed because of infection. Most don't last very long after that."..

The loris is a nocturnal animal and is effectively being blinded by the daylight in the videos. Disoriented, it grasps at the umbrella believing it is the bamboo of its natural terrain.

A hat tip to Cory Doctorow for the BoingBoing via.