A cartoon for English majors - updated 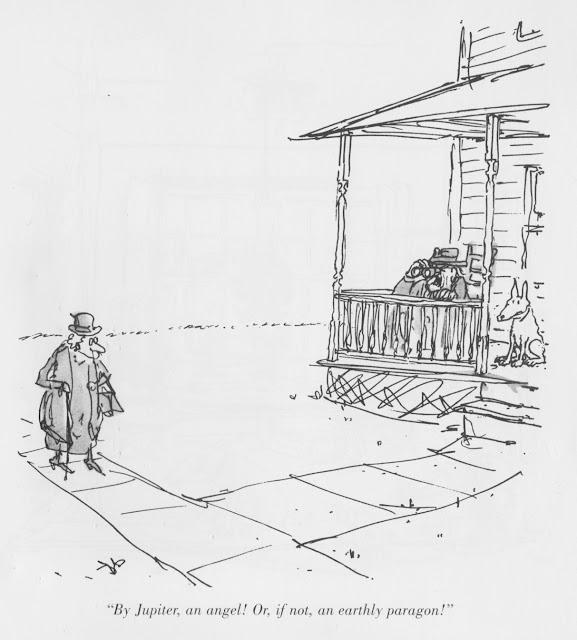 This one was "over my head."  I'll post now for other English majors to ponder, and update after the weekend with some relevant details and links.
Addendum: As I was preparing this series of memorial posts about George Booth, one of the library books included some biographical material.  They indicated that Booth did not tend to use "gag writers" to provide the captions accompanying his cartoons, but that when he did encounter a potentially useful phrase, he saved it up until an appropriate cartoon came to mind.  Two examples were cited.
The cartoon above has text based on the play Cymbeline (in Act III, Scene 6 "Wales.  Before the cave of Belarius"), when they spot Imogen (dressed as a boy) in the cave:

[Looking into the cave]
Stay; come not in.
But that it eats our victuals, I should think
Here were a fairy.

By Jupiter, an angel! or, if not,
An earthly paragon! Behold divineness
No elder than a boy!

Good masters, harm me not:
Before I enter'd here, I call'd; and thought
To have begg'd or bought what I have took:
good troth,
I have stol'n nought, nor would not, though I had found
Gold strew'd i' the floor. Here's money for my meat...

The scene has been illustrated for various publications of the play, as in this example (a reproduction from the Dallas Museum of Art): 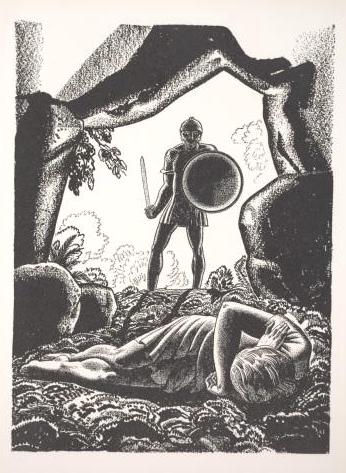 and yet again here: 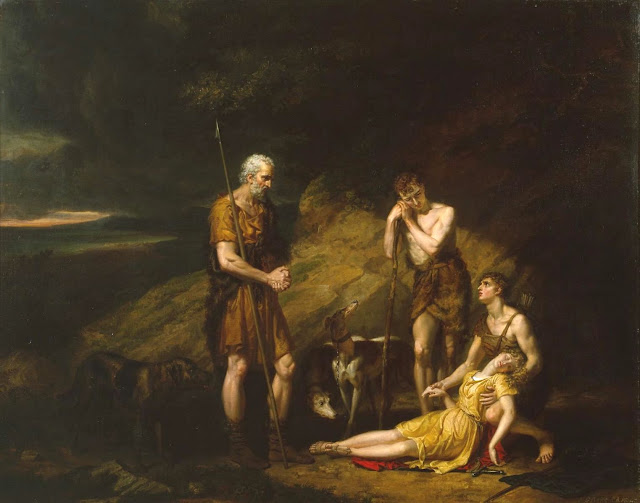 So the scene appears to be well recognized by artists and thespians.  But the phrase "By Jupiter, an angel..." was totally unfamiliar to me (in my defense I would suggest that Cymbeline is one of Shakespeare/deVere's lesser-performed works).  It wasn't until I read the Booth biography and the cartoon at the top was discussed that I was prompted to search Google for the true source of the quotation.
Interestingly, the biography went on to offer one more cartoon based on a quotation from someone.  The caption in this cartoon - 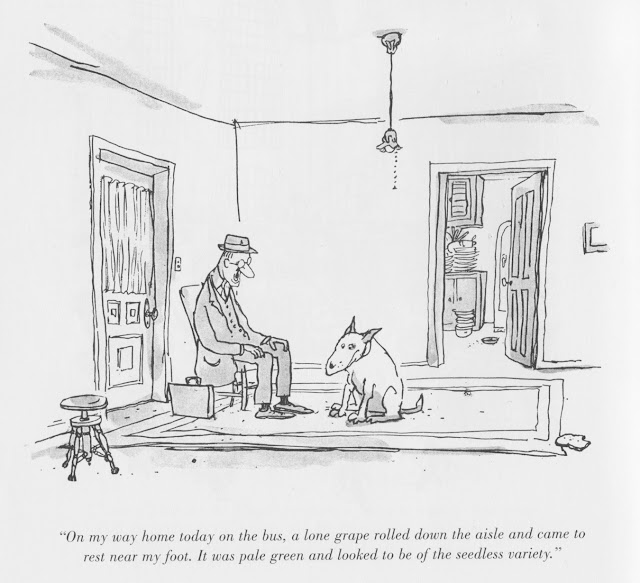 - was credited to "Hank Martin."  I spent a lot of time fruitlessly Googling that name before finally deciding that the reference must be to Henry Martin, who like Booth was a longtime New Yorker cartoonist.
But... to what is the text of the caption referring???  I have been unable to find a primary source for the "lone grape" sentences (searches typically lead to cartoon compilations that include both Booth and Martin).  Perhaps the excitement on the bus was something spoken to Booth by Martin privately, or perhaps it exists in some correspondence or book.  For now it remains a mystery unless some reader of this blog can suss it out.
Related:  Humor for English majors and A jury of English majors.