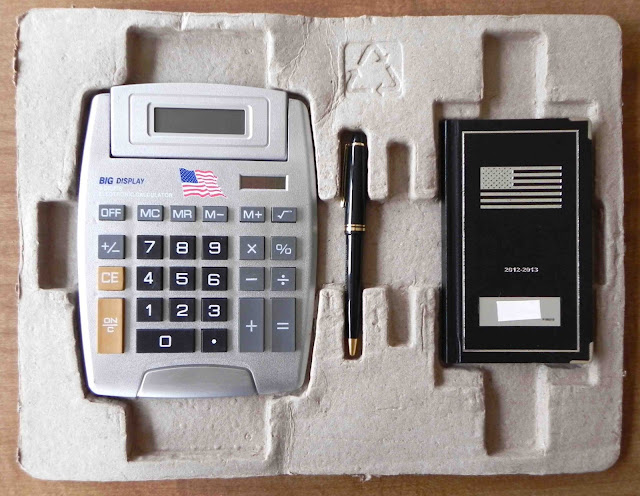 This elaborate "desk set" (calculator, pen, note pad) arrived unsolicited in the mail this week, from the Disabled Veterans National Foundation.  Because our family does donate money to charities, and because I know they exchange (or sell) names of donors to one another, I'm never surprised when new appeals arrive in the mail.

But this one was fancier by a couple log powers than anything I had ever seen before.   Even more elaborate than the made-in-China pseudo-Native-American-craft dreamcatcher I blogged two years ago.  Most charities simply send return-address labels.

So I decided to investigate.  My first stop was Charity Navigator, an unbiased resource for those who wish to give to charities.  Unfortunately, this was their response: "We don't evaluate Disabled Veterans National Foundation. Why not? We require 4 years of Forms 990 to complete an evaluation."

So I looked at the evaluation at Charity Watch:


Claims made about the percentage of donations going to charity are not the only contradictions AIP found when investigating DVNF. "For 35 years we have been putting service to others before ourselves," says one DVNF solicitation. This is an interesting statement considering the charity was not incorporated until November 2007, according to its 2008 tax form...

According to that AIP member, DVNF first sent a large plastic envelope containing a calculator and planner which she had not requested, along with a contribution form. They later sent her a follow-up solicitation asking "Did you receive the Patriotic Calculator and Planner Set I sent you?" This statement was printed in red letters above her name and address on the envelope next to a photo of an injured soldier being carried into a helicopter on a stretcher. Charities that mail unrequested gifts while at the same time requesting contributions are trying to guilt you into giving, in AIP's opinion. Donors should be aware that they are under no legal or, for that matter, moral obligation to send contributions in response to gifts they have not requested...

The language in this solicitation could lead potential donors to believe that the charity seeks funds primarily for direct assistance to veterans, which is not the case. According to DVNF's 2008 audit, only $127,421 or less than 1% of DVNF's $16.3 million budget could have been spent on grants or aid to individuals. Except for this amount and a $40,000 unrestricted grant to a related party, all the rest of DVNF's reported program expenses of $4.5 million were direct mail related.

In fairness, I'll note this evaluation was posted in August of 2010, so there may be newer data.  But I'll give this one a pass.

Update:  I wrote the above on April 30.  Yesterday, as predicted, the followup request arrives, not as an "invoice," but as a "receipt verification form." The reply form reads "YES! I received the calculator and 14 month planner.  I want to honor the disabled American heroies whokeep our nation safe!  To help these courageous men and women get the respect & benefits their military service earned, here's my gift of..."

Also, a tip of the hat to reader Corey, who notes that on May 8 CNN addressed this issue:


A national charity that vows to help disabled veterans and their families has spent tens of millions on marketing services, all the while doling out massive amounts of candy, hand sanitizer bottles and many other unnecessary items to veteran aid groups, according to a CNN investigation.


The Disabled Veterans National Foundation, based in Washington, D.C., and founded in 2007, received about $55.9 million in donations since it began operations in 2007, according to publicly available IRS 990 forms.

Yet according to the DVNF's tax filings with the IRS, almost none of that money has wound up in the hands of American veterans.

Instead, the charity made significant payments to Quadriga Art LLC, which owns two direct-mail fundraising companies hired by the DVNF to help garner donations, according to publicly available IRS 990 forms...

DVNF specifically cited a small veterans charity called St. Benedict's. But the charity's executive director said most of the donations from DVNF could hardly be classified as "badly needed."

In one instance, the DVNF claimed more than $838,000 in fair market value donations to a small charity called US Vets in Prescott, Arizona. CNN obtained the bill of lading for that shipment, which showed that, among other things, hundreds of chefs coats and aprons were included in the delivery, along with a needlepoint design pillowcase and cans of acrylic paint. The goods listed in the two-page shipping document were things "we don't need," a US Vets spokesman said.

More at the link. Many "charities" that ask for your money use a similar ploy.  They request free items from corporations - "gifts in kind" - then declare an inflated "market value" of those gifts when they give them away, which they use to offset the cash contributions they get from you.  The corporations in turn, of course, declare some value for these "gifts in kind" to deduct on their state and federal tax statements as charitable contributions to lower their taxes.

I spent the better part of 20 years of my working life serving U.S. veterans, so I have a personal interest in seeing that this particular story gets the attention it needs.

Addendum:  As Dan F. notes, the group is now going to be the subject of a Senate investigation.

Addendum #2:  Reposted from 2012 because the most recent comment from a reader indicates that this group is still in business.  The Senate inquiry apparently resulted in a monetary fine (and a promise to reform).

Addendum #3:  Re-reposted from 2014 because comments continue to be added to the thread, so the DVNF is apparently still active.  This post is one of the most often-visited pages in TYWKIWDBI, which is kind of sad, really.
Addendum #4:  Re-re-reposted from 2017 for the same reasons as above.  And this year the DVNF is listed on Charity Navigator with a score of 36%, which earns it zero stars.