Word for the day: Biarritz-style 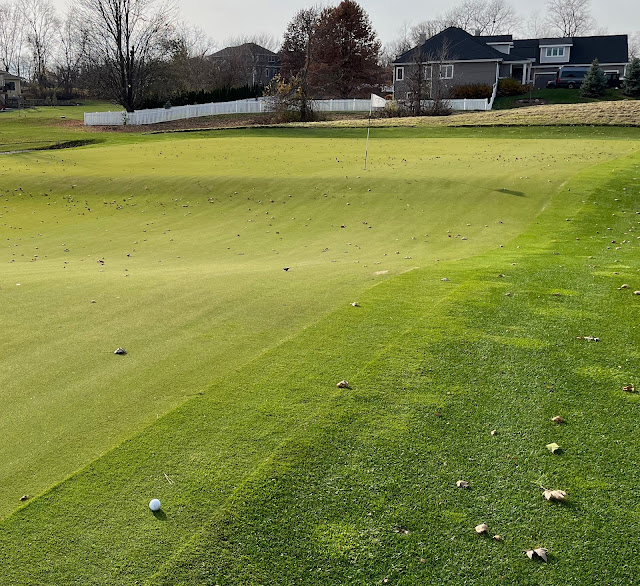 Several weeks ago I played my last round of golf for the year.  The sport had been "prescribed" for me by orthopedic surgeons back in the 1950s as postoperative therapy after I underwent surgical repairs of polio-induced flexion contractures in my legs.  Both of my parents had been recreational golfers since the 1930s, when the sport was popularized by Sam Snead and Bobby Jones.  We played as a family on public courses, including rural ones with sand greens.
I was intrigued last year to read about Pioneer Pointe Golf Course opening in the Madison, Wisconsin area.  Executive golf courses are shorter than normal - typically all par 3s, or with a short par-4, and sometimes comprising only 13 holes instead of 18.  They are designed to appeal to "executives" who don't have the requisite time for playing a full 18 holes, but also appeal to aging persons like me who no longer relish facing a 570-yard par 5.
The developers of this course also incorporated some unusual features in the course design.  The image above shows where my (mulligan) tee shot landed on the 200-yard 7th hole.  Between me and the wickedly-placed pin is a transverse swale bisecting the front and back plateaus of the green, designed not for stormwater drainage but rather to challenge the putting skills of the golfer.  This was described as "Biarritz-style," but never having played fancy golf courses I had to look that up.
This video offers and explanation along with flyovers of some of the world's most famous "Biarritz-style" holes:

"In 1888, Willie Dunn Jr. designed the Biarritz Golf Club and the par-3 3rd hole which was dubbed “the chasm”. The chasm was adopted by C.B. Macdonald as a template hole and named “the biarritz.” Fellow architects were slow to grow fond of the bold and controversial putting surface that Macdonald was employing and called it “Macdonald’s Folly” in the early years.
Biarritz holes are long par-3s, typically 210-240 yards, designed to test a player’s ability to hit accurate long shots. Its defining characteristic is the massive green that stretches up to 80 yards. The large green is bisected by a deep swale in the middle —  usually 3-5 feet deep — and is protected by narrow bunkers on both sides of the green."

Here is an awesome one (more still photos at The Fried Egg): 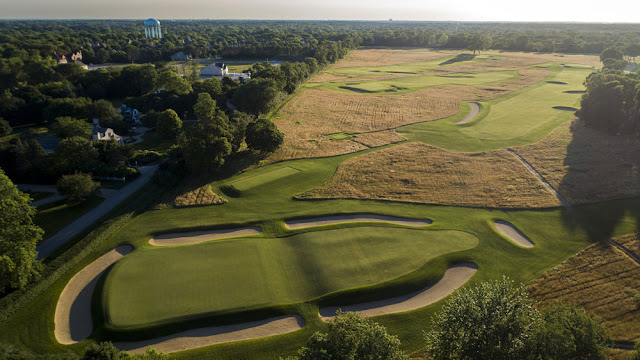 I three-putted, and had fun doing so.  I hope to be back there next summer ($19 for a round of golf is not bad).  Here's another green from the Pioneer Pointe golf course, with a bunker in the center of the green: 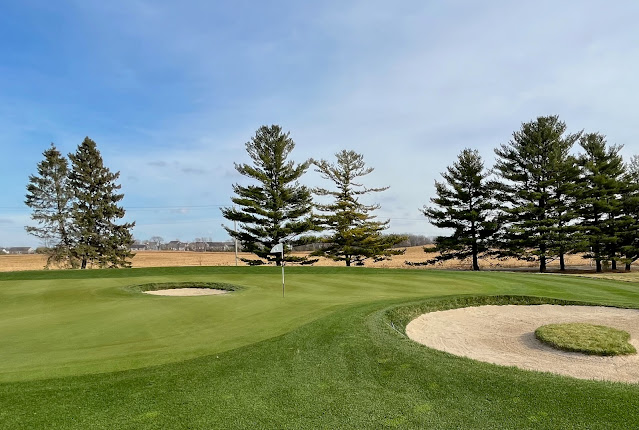