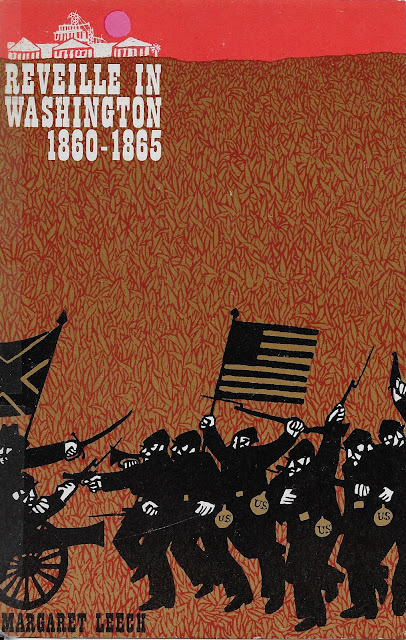 I first purchased Margaret Leech's Reveille in Washington 1860-1865 in the 1960s, when I subscribed to the Time Reading Program.  Enjoyed it then and put it aside to reread.  First reread in 2002, then saved for a final reread "someday."  Someday arrived this past week, but I had to settle for a couple evenings of browsing, because this is a large (500+ pages) and dense book filled with information.

The editor's preface offers this tidbit:


"Of books about the Civil War there is no foreseeable end.  Since the last shot was fired, it is estimated that there has been published, on an average, one a day."

This book is different from most Civil War histories in that it does not focus on the battles per se.  Instead of the usual profusion of maps with little arrows and the endless litany of body counts, Margaret Leech wrote about the nation's capital, Washington D.C. - the life center of the endangered Union but located in essentially a southern state.  And instead of focusing intensely on General Robert E. Lee and General Grant and the other famous military leaders, she looks at the lives and contributions of noncombatants like Dorothea Dix, Louisa May Alcott, Clara Barton, Walt Whitman.  There are chapters, or large parts of chapters, detailing Washington fashion and dancing and parties, and the city as a hotbed of prostitution, tourists scavenging local battlefields for souvenirs... 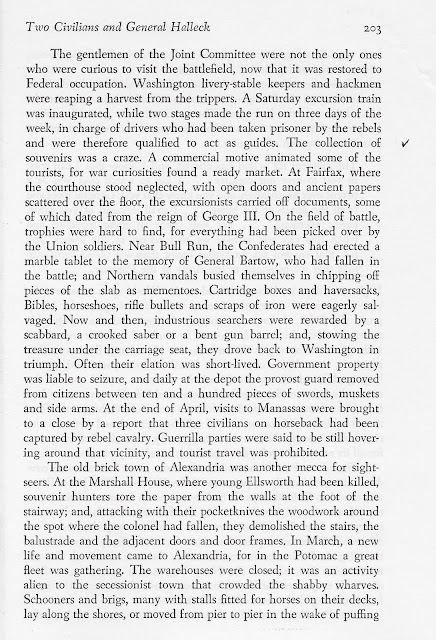 ... and at the White House itself as victory got near... 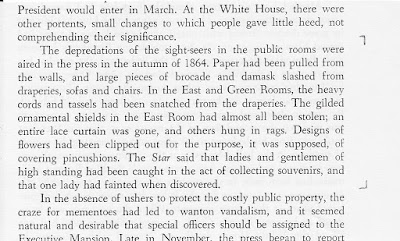 ... and the complexities of provisioning both the Army of the Potomac and the city itself, the ravages of alcoholism, the treatment of escaped slaves as "contraband of war," the inadequacies of medical care and public health, the profligacy and odd behavior (purchasing 300 pairs of gloves in 4 months) of First Lady Mary Lincoln, and of course the theater life (especially Ford's Theater) and a profile of Booth and his abduction plot.

The book was awarded the Pulitzer Prize for History in 1942.  It's probably TMI for the casual reader, but for history enthusiasts it's a real treat.