I wonder what writers think the breath is baited with ??? 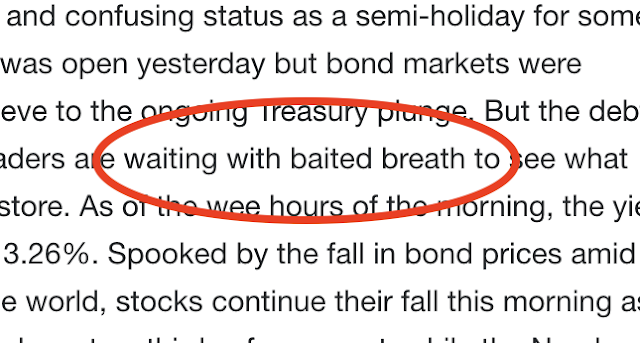 Saw this comment somewhere yesterday, and I agree with World Wide Words that this error is so common that there is a real danger "that it will soon become the usual form."


Bated and baited sound the same and we no longer use bated (let alone the verb to bate), outside this one set phrase, which has become an idiom. Confusion is almost inevitable. Bated here is a contraction of abated through loss of the unstressed first vowel (a process called aphesis); it means “reduced, lessened, lowered in force”. So bated breath refers to a state in which you almost stop breathing as a result of some strong emotion, such as terror or awe.

Shakespeare is the first writer known to use it, in The Merchant of Venice, in which Shylock says to Antonio: “Shall I bend low and, in a bondman’s key, / With bated breath and whisp’ring humbleness, / Say this ...”. Nearly three centuries later, Mark Twain employed it in Tom Sawyer: “Every eye fixed itself upon him; with parted lips and bated breath the audience hung upon his words, taking no note of time, rapt in the ghastly fascinations of the tale”.

For those who know the older spelling or who stop to consider the matter, baited breath evokes an incongruous image; Geoffrey Taylor humorously (and consciously) captured it in verse in his poem Cruel Clever Cat: