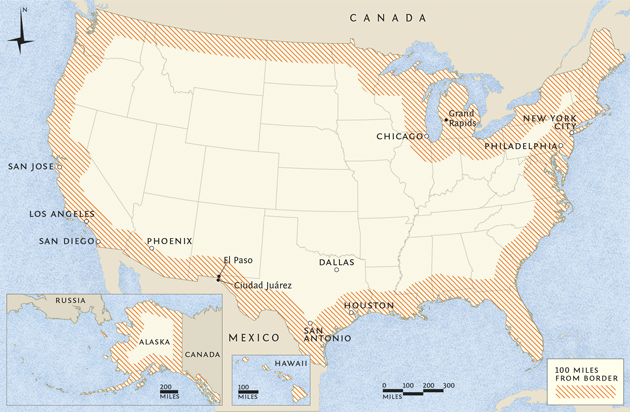 Excerpts from an article in this month's Harper's:


Laura Sandoval threaded her way through idling taxis and men selling bottles of water toward the entrance of the Cordova International Bridge, which links Ciudad Juárez, Mexico, to El Paso, Texas. Earlier that day, a bright Saturday in December 2012, Sandoval had crossed over to Juárez to console a friend whose wife had recently died. She had brought him a few items he had requested—eye drops, the chimichangas from Allsup’s he liked—and now that her care package had been delivered, she was in a hurry to get back to the Texas side, where she’d left her car. She had a three-hour drive to reach home, in the mountains in New Mexico, and she hated driving in the dark.

Sandoval took her place in the long line of people waiting to have their passports checked by US Customs and Border Protection (CBP). When it was her turn, she handed her American passport to a customs officer and smiled amicably, waiting for him to wave her through. But the officer said she had been randomly selected for additional screening. Sandoval was led to a secondary inspection area nearby, where two more officers patted her down. Another walked toward her with a drug-sniffing dog, which grew agitated as it came closer, barking and then circling her legs. Because the dog had “alerted,” the officer said, Sandoval would now have to undergo another inspection.

She was taken to a fluorescent-lit, windowless room inside the port of entry office. Two female officers entered and announced that they were going to search her for drugs. They patted her down again, but found nothing. At that point, Sandoval assumed they would release her, but instead they told her they were going to conduct a strip search. The officers put on latex gloves, picked up flashlights, and asked Sandoval to remove her clothes and bend over so they could look for signs of drugs in her vagina and her rectum.

By the time they finished, Sandoval had been detained for more than two hours in the stifling room. Her passport and cell phone had been confiscated; her husband and children had no idea where she was. Sandoval begged to be released. “I was shaking and I was in tears,” she told me. Saying nothing, the officers put her in handcuffs and led her to a patrol car waiting outside. They left the international bridge and drove north into Texas. Frightened, Sandoval asked the officers if they had a warrant for her arrest. “We don’t need a warrant,” one of them replied...

Sandoval, whose name has been changed to protect her privacy, told me that after the officers forced her into the squad car, they drove her to University Medical Center, a public hospital in El Paso. The officers found an empty room and shackled her to the examination table. A nurse entered and asked her to swallow a laxative so they could observe her bowel movement. Then a group of doctors came in. Sandoval pleaded with them to let her go. “A nurse told me to calm down,” she said. “That this was something they did anytime Border Patrol brought people in.” One of the doctors conducted a vaginal and rectal search using a speculum and his hands. “The agents kept saying that they knew I had drugs,” Sandoval told me. Still not satisfied, the doctor ordered an X-ray and a full-body scan. Again they found nothing...

Sandoval tried to forget about what had happened to her. She figured it would be too costly to fight the government. But then the bills from the hospital started to arrive. For the cavity searches, the X-ray, and the CT scan, the hospital was charging her $5,488. [she had refused to sign a consent form]

The article continues at Harper's.   I'm going to close comments for this post.  Posted because some people don't realize what's going on in this country.  Just to emphasize - this lady is a legal American citizen.  The only "probable cause" was someone's interpretation of a dog's behavior.


And these CBP agents operate not just at the border itself, but for a hundred miles inside (see the map at top), where two-thirds of all Americans live.  Some "roving patrols" extend twice that far.

In 2008, Patrick Leahy, a senator from Vermont, was stopped at a temporary immigration checkpoint in New York—125 miles from the border. Agents ordered Leahy to get out of his car and asked him to prove that he was a US citizen. When Leahy asked under what authority the Border Patrol agent was acting, the agent pointed to his gun and said, reportedly, “That’s all the authority I need.”...

[Beto] O’Rourke’s opposition to CBP’s sweeping powers stems in part from his own encounter with border agents. In 2009, he and his two-year-old son were detained at a checkpoint more than seventy miles from the border while agents pulled his truck apart. “They don’t have to explain why they’re holding you,” he said, “and you’re not given the right to an attorney.” O’Rourke told me that he and his son were held in a cell for close to thirty minutes before they were allowed to leave. “It was a strange feeling to be held against my will and to have my car searched,” he said. “I hadn’t committed any crime. I hadn’t even crossed the border.”..

Sandoval said she was glad to hear that the hospital had changed its policy, but she still worried that CBP would subject others to similar treatment. She has not been back to Juárez. “It’s not because I’m afraid to go to Mexico,” she told me. “I’m afraid of coming back to my own country.”

There's more at the link.  Sad.