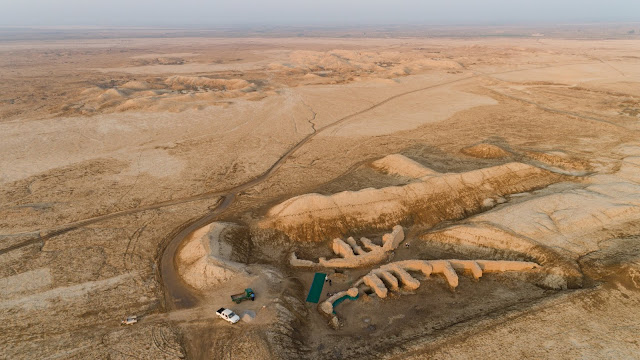 As reported by The British Museum:


The bridge at Tello was built in the third millennium BC, making it the oldest bridge still in existence. This remarkable survival will be preserved by a team of British Museum archaeologists and Iraqi heritage professionals who are being trained to protect ancient sites that have suffered damage at the hands of Daesh (or the so-called Islamic State)...

Built for the ancient Sumerian city of Girsu, the bridge was only rediscovered in 1929. Described at the time as an ‘enigmatic construction’, it has been variously interpreted as a temple, dam and water regulator. Recent studies using 1930s photographs as well as recently declassified satellite imagery from the 1960s, alongside new research at the site, have confirmed that it was a bridge over an ancient waterway and that it is (at the time of writing) the earliest-known bridge in the world. Since the excavations nearly 90 years ago, the bridge has remained open and exposed, with no identifiable conservation work to address its long-term stability or issues of erosion, and no plans to manage the site or tell its story to the wider world.

More photos and a video at the link.