As our Federal government continues trying to prop up the coal and oil industries, some cities in Minnesota are taking the initiative to shift their energy usage to renewable sources. 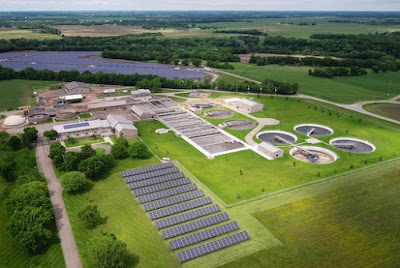 The sewage plant in [St. Cloud, Minnesota] does something even a non-engineer might find remarkable: It makes so much of its own energy that on some days, when the sun shines bright, the plant’s managers don’t need to buy electricity... That happened for the first time on April 12 of last year. Since then, it’s happened on 30 additional days, most recently on June 5.

Those “net zero” days in St. Cloud are among a wave of positive anecdotes from municipalities across the state about early efforts to adopt renewable energy. Driven by favorable economics and, to a lesser extent, constituent proddings, many cities have turned to solar and other renewables so quickly that even the people pushing for the change say they’re surprised...

Solar has grown so quickly in Minnesota, in fact, that between 2016 and 2017 the amount of solar power produced didn’t just double or triple, but grew by a factor of 72, according to the Minnesota Department of Commerce...

The city has since subscribed to 32 solar gardens — at least 20 commissioned last year alone — for a total of 23 million kilowatt-hours of solar energy, or enough to meet about three-quarters of demand.

Solar panels were also installed on the roof of the police headquarters, a fire station, a senior center and three other city buildings. A conversion to LED helped cut in half electrical use for streetlights between 2015 and 2017. Efficiencies at the sewage plant lowered its power demands as the new biodigester and solar panels came online. The public transportation system, meanwhile, converted nearly two-thirds of its bus fleet to compressed natural gas. That lowers carbon emissions and has saved St. Cloud Metro Bus about $450,000 in fuel costs over the past three years.