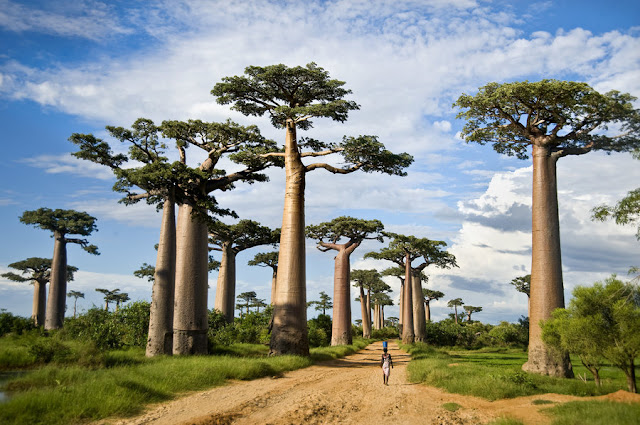 
Around 1,500 years ago, shortly after the collapse of the Roman Empire, a baobab tree started growing in what is now Namibia. The San people would eventually name the tree Homasi, and others would call it Grootboom, after the Afrikaans words for “big tree.” As new empires rose and fell, Homasi continued growing. As humans invented paper money, printing presses, cars, and computers, Homasi sprouted new twigs, branches, and even stems, becoming a five-trunked behemoth with a height of 32 meters and a girth to match.

The tree’s demise was sudden and unexpected. In March, at the end of the rainy season, Homasi was in full bloom. But by late June, its health had suddenly deteriorated. One by one, its stems broke off from the gargantuan trunk and toppled. The last of them fell on New Year’s Day, 2005, ending 15 centuries of life...

This isn’t an isolated event. Of the 13 oldest known baobabs in the world, four have completely died in the last dozen years, and another five are on the way, having lost their oldest stems. “These large and monumental trees, which can live for 2,000 years or more, were dying one after another,” says Adrian Patrut from Babes-Bolyai University in Romania, who has catalogued the deaths. “It’s sad that in our short lives, we are able to live through such an experience.”

Baobabs often have hollow trunks, with huge internal cavities that humans have used as shops, houses, chapels, and even prisons. When trees are hollow, it’s usually because the wood inside them has died. But baobab hollows were never filled; instead, these trees periodically produce new stems in the way that other trees sprout new branches. It’s the stems, fused together in a ring, that form the hollow space. That’s why the cavity is lined with bark, and shrinks with age.

More at NPR (whence the embedded photo) and at The Guardian.