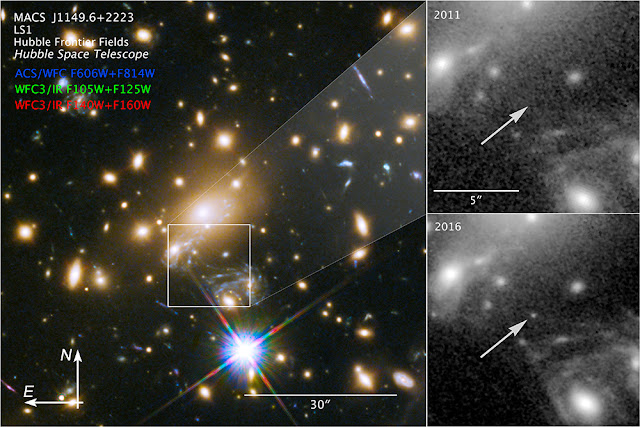 The furthest-from-earth non-supernova star was discovered incidentally because its light emissions were lensed around a cluster of galaxies.


MACS J1149+2223 Lensed Star-1, also known as Icarus, is a blue supergiant observed through a gravitational lens and the most distant individual star detected, at 9 billion light-years from Earth... Light from the star was emitted 4.4 billion years after the Big Bang.  According to co-discoverer Patrick Kelly, the star is at least a hundred times more distant than the next-farthest non-supernova star observed, and is the first magnified individual star seen.

More at the link.  I find it curiously difficult to think about this star using verbs in the present tense, since everything we know about it (position, size, wavelengths) describe it nine billion years ago.

Related (with some discussion of gravitational lensing): The first "multiple-image gravitationally-lensed supernova."