This technique was written up in The Atlantic about ten years ago. It's an extensive and interesting narrative that covers not just the science but the sociology of the process.


In his preliminary research, Catania found some other interesting clues. One was the observation by the famous Dutch ethologist Nikolaas Tinbergen that one species of gull performs a “foot paddling behavior” that appears to bring up earthworms to the surface, a response he attributed to an innate reaction that enables the worms “to escape their arch enemy the mole.” More recently the American naturalist John Kaufmann who studied wood turtles reported that they engage in a stomping behavior that brings earthworms to the surface so they can eat them...

The next step was to determine how the native earthworms respond to the presence of moles. He built a small test box (20x25x19 cm) and filled it with 50 earthworms. The box had a tube in the side that allowed him to introduce a mole to the mix. As soon as a mole began tunneling into the test box, dozens of earthworms popped to the surface, wriggling at top speed with many even crawling over the top of the box.

“Eastern moles don’t come to the surface when they are foraging, so fleeing to the surface provides the worms both immediate safety and the most efficient means for getting away from them,” Catania says...

Finally, Catania compared the vibrations produced by worm grunting and those of a mole burrowing. “The moles are quite noisy. Often you can hear the sounds of a mole digging in the wild from a few feet away,” he said. Analyzing the geophone recordings of the two types of sound, he found that the worm grunting vibrations were more uniform and concentrated near 80 Hz whereas the moles produce a wider range of vibrations that peak at around 200 Hz. Nevertheless, there is a considerable overlap between the two.

Reposted from 2009 to add this video of competitive worm charming in England:

The video prompted me to look up The Eighteen Rules of Worm Charming:
Reposted from 2016 to add this photo of a participant in the Falmouth Worm Charming Championships (credit Hugh R Hastings / Getty). 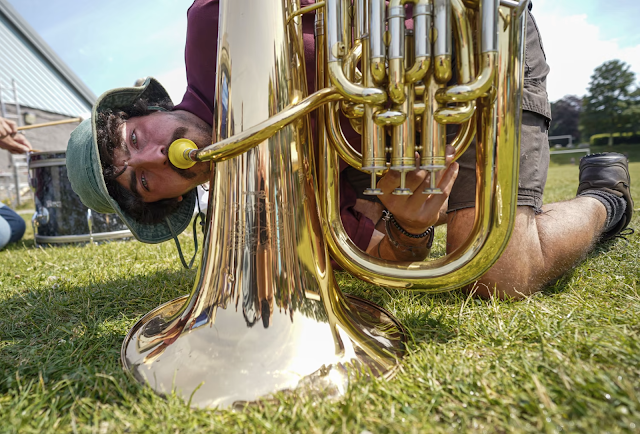