“To My Fellow Filthy Rich Americans: The Pitchforks Are Coming” 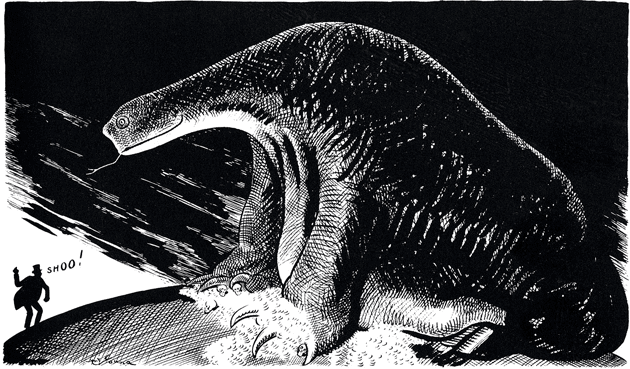 Capitalism and the Reformer, by Art Young,
from The Best of Art Young © 1936 The Vanguard Press, Inc., New York City, via Harper's.

Excerpts from an open letter:


You probably don’t know me, but like you I am one of those .01%ers, a proud and unapologetic capitalist. I have founded, co-founded and funded more than 30 companies across a range of industries...

What sets me apart, I think, is a tolerance for risk and an intuition about what will happen in the future. Seeing where things are headed is the essence of entrepreneurship. And what do I see in our future now?

At the same time that people like you and me are thriving beyond the dreams of any plutocrats in history, the rest of the country—the 99.99 percent—is lagging far behind...

But the problem isn’t that we have inequality. Some inequality is intrinsic to any high-functioning capitalist economy. The problem is that inequality is at historically high levels and getting worse every day. Our country is rapidly becoming less a capitalist society and more a feudal society. Unless our policies change dramatically, the middle class will disappear, and we will be back to late 18th-century France. Before the revolution.

And so I have a message for my fellow filthy rich, for all of us who live in our gated bubble worlds: Wake up, people. It won’t last...

If we don’t do something to fix the glaring inequities in this economy, the pitchforks are going to come for us. No society can sustain this kind of rising inequality. In fact, there is no example in human history where wealth accumulated like this and the pitchforks didn’t eventually come out. You show me a highly unequal society, and I will show you a police state. Or an uprising. There are no counterexamples. None. It’s not if, it’s when...

The model for us rich guys here should be Henry Ford, who realized that all his autoworkers in Michigan weren’t only cheap labor to be exploited; they were consumers, too. Ford figured that if he raised their wages, to a then-exorbitant $5 a day, they’d be able to afford his Model Ts...

Which is why the fundamental law of capitalism must be: If workers have more money, businesses have more customers. Which makes middle-class consumers, not rich businesspeople like us, the true job creators. Which means a thriving middle class is the source of American prosperity, not a consequence of it. The middle class creates us rich people, not the other way around.

Fulltext of the letter here.  Via Jobsanger.