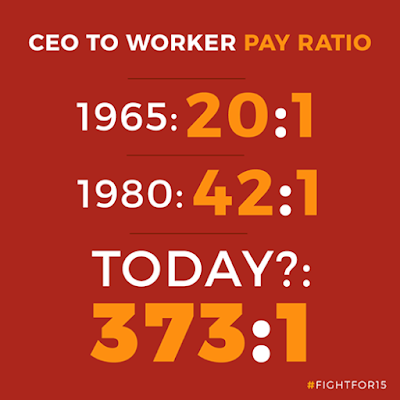 Found at Jobsanger.  The numbers correspond to those published elsewhere:


The already astronomical ratio between the pay of CEOs and their workers climbed even higher in 2014, the AFL-CIO said Wednesday in its annual Executive Paywatch report.

The topic is discussed at the New York Times.

“When the C.E.O. of a company makes almost $20 million a year but then tries to outsource jobs, reduce wages and cut health benefits — that’s the kind of corporate greed we need to get rid of in America,” Mr. Sanders’s campaign wrote in an email to supporters recently. “And that’s exactly what Verizon is doing right now.”

Starting her campaign last year, Mrs. Clinton contrasted working Americans with chief executives. “Families have fought their way back from tough economic times,” she wrote in a campaign email. “But it’s not enough — not when the average C.E.O. makes about 300 times what the average worker makes.”

No less than Mr. Trump, the presumptive Republican nominee and a wealthy businessman himself, suggested that executive pay was, in some instances, excessive. “You see these guys making these enormous amounts of money,” Mr. Trump said on “Face the Nation” last year. “It’s a total and complete joke.”

The presidential contenders are responding to a sense of outrage among many working-class men and women.