The myth of "equal opportunity" in colonial America

Here's an extended excerpt from an "The Original Underclass," an article in the September issue of The Atlantic: 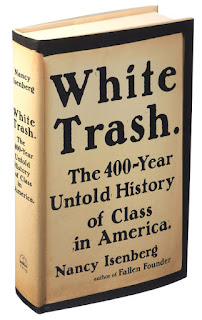 For England, the New World beckoned as more than a vast store of natural resources, Isenberg argues. It was also a place to dispose of the dregs of its own society. In the late 16th century, the geographer Richard Hakluyt argued that America could serve as a giant workhouse where the “fry [young children] of wandering beggars that grow up idly and hurtfully and burdenous to the Realm, might be unladen and better bred up.” The exportable poor, he wrote, were the “offals of our people.” In 1619, King James I was so fed up with vagrant boys milling around his Newmarket palace that he asked the Virginia Company to ship them overseas. Three years later, John Donne—yes, that John Donne—wrote about the colony of Virginia as if it were England’s spleen and liver, Isenberg writes, draining the “ill humours of the body … to breed good bloud.” Thus it was, she goes on, that the early settlers included so many “roguish highwaymen, mean vagrants, Irish rebels, known whores, and an assortment of convicts,” including one Elizabeth “Little Bess” Armstrong, sent to Virginia for stealing two spoons.

One of America’s founding myths, of course, is that the simple act of leaving England and boldly starting new lives in the colonies had an equalizing effect on the colonists, swiftly narrowing the distance between indentured servant and merchant, landowner and clerk—all except the African slave. Nonsense, Isenberg says: “Independence did not magically erase the British class system.” A “ruthless class order” was enforced at Jamestown, where one woman returned from 10 months of Indian captivity to be told that she owed 150 pounds of tobacco to her dead husband’s former master and would have to work off the debt. The Puritans were likewise “obsessed with class rank”—membership in the Church and its core elect were elite privileges—not least because the early Massachusetts settlers included far more nonreligious riffraff than is generally realized. A version of the North Carolina constitution probably co-authored by John Locke was designed to “avoid erecting a numerous democracy.” ...
Class distinctions were maintained above all in the apportionment of land. In Virginia in 1700, indentured servants had virtually no chance to own any, and by 1770, less than 10 percent of white Virginians had claim to more than half the land. In 1729 in North Carolina, a colony with 36,000 people, there were only 3,281 listed grants, and 309 grantees owned nearly half the land. “Land was the principal source of wealth, and those without any had little chance to escape servitude,” Isenberg writes. “It was the stigma of landlessness that would leave its mark on white trash from this day forward.”...

The Founding Fathers were, as Isenberg sees it, complicit in perpetuating these stark class divides. George Washington believed that only the “lower class of people” should serve as foot soldiers in the Continental Army. Thomas Jefferson envisioned his public schools educating talented students “raked from the rubbish” of the lower class, and argued that ranking humans like animal breeds was perfectly natural. “The circumstance of superior beauty is thought worthy of attention in the propagation of our horses, dogs and other domestic animals,” he wrote. “Why not that of man?” John Adams believed the “passion for distinction” was a powerful human force: “There must be one, indeed, who is the last and lowest of the human species.”

I have not read the book, but the review is enticing.