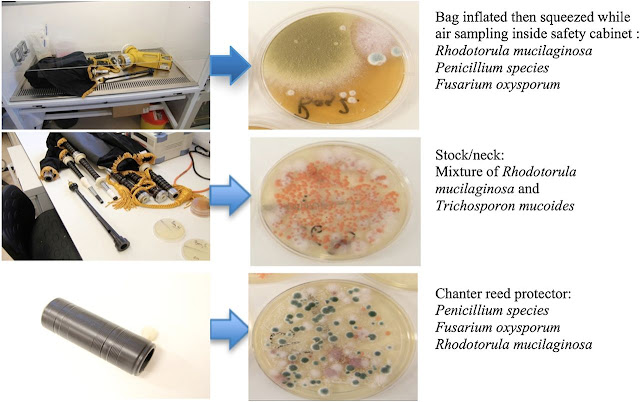 A newly-recognized occupational hypersensitivity pneumonitis has been reported in Thorax:

This is the first case report identifying fungal exposure, from a bagpipe player, as a potential trigger for the development of HP. The clinical history of daily bagpipe-playing coupled with marked symptomatic improvement when this exposure was removed and the identification of multiple potential precipitating antigens isolated from the bagpipes make this the likely cause.

Many of the isolated fungi in this case have previously been implicated in the development of HP.  The moist environment of bagpipes promotes yeast and mould contamination, thereby making the chronic inhalation of offending antigens a likely trigger. This report highlights the importance of careful clinical history when assessing patients with respiratory symptoms. We often associate exposures to birds and pigeons, or living in environments contaminated with mould, as potential triggers for HP. In a significant proportion of patients, a trigger is not identified. In this case, playing the bagpipes, an important hobby in the history, was not initially realised as a potential trigger in the development of the disease, and subsequently, no serum-precipitating antibodies to moulds or fungi were performed. The temporal relationship with an improvement in symptoms while abroad and the subsequent identification that the patient was not playing the bagpipes highlighted this source as a potential trigger.

Hypersensitivity pneumonitis has been reported in musicians playing other wind instruments:

There have been previous case reports of HP in saxophone and trombone players attributable to isolated fungi and Candida. In one case described by Metzger et al, Ulocladium botrytis and Phoma sp were isolated from the saxophone, and subsequent serum-specific antibodies to these fungi were tested and found to be positive. The patient began regular drying of the saxophone after use, and cleaning it with disinfectant. They were treated with 32 mg/day of methylprednisolone for 1 month. These measures led to marked improvement of symptoms and radiology after 2 months. Repeat samples from the saxophone were negative for moulds or fungi. In a further case described by Metersky et al, a trombone player developed suspected HP based on clinical and radiological findings. Symptoms showed the same temporal relationship as described in this case, as they significantly improved on cessation of playing the trombone for 2 weeks.