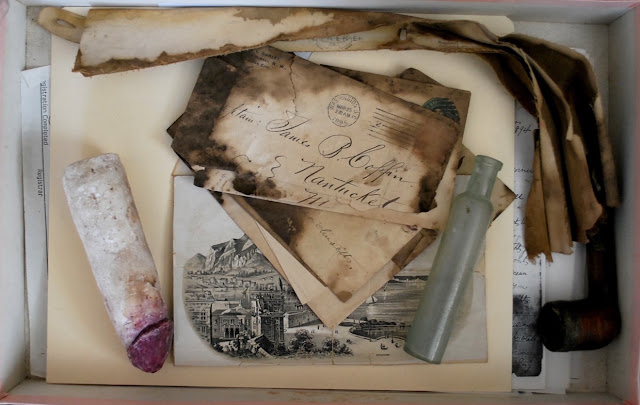 In the box were the other antiques the mason had found with the dildo: six charred envelopes from the 1890s addressed to Captain James B. Coffin; letters from the same James B. Coffin to Grover Cleveland and Assistant Secretary of State Edwin Dehl; a dirty and frayed shirt collar; a pipe that still smelled of tobacco when I fit my nose in the bowl; and a green glass laudanum bottle. These items must have been hidden in the chimney by James’s wife,­ Martha “Mattie” Coffin, sometime between when the letters were dated and when she died in 1928. The fireplace was later sealed up, and a closet was built in front of it...

She unwrapped the stony phallus from its pink tissue paper and handed it to me. It was heavier than it looked. The head had been painted wild-berry red. The shaft was off-white and touched with light brown stains. Through the center was a hole no thicker than a straw, as if it had been skewered for drying. Saw marks streaked the cross section of the flat base, and it had been circumcised with whittling scrapes. “No mistaking what it is,” Connie said, as I turned it in my hand...

Much more at Literary Hub.  Well worth the read for those interested in the subject matter.

I can't close without including a link to the famous poem(s) "There Once Was a Man From Nantucket."

Reposted from 2015 to add this report of a similar item being auctioned in Ireland: 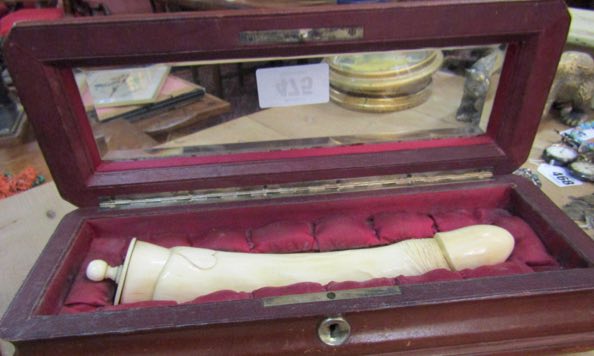 Lot 475 is a Victorian-era sex toy – an uncannily lifelike-looking phallus, intricately carved from ivory. Sandwiched in the brochure between a pair of antique miniature portraits and a set of decanter labels, the item is described in the brochure as an “antique carved ivory ladies companion in scarlet lined leather upholstered carry box with inset bevelled glass panel”.


“It is a beautiful piece, which comes from one of the well-known Anglo-Irish families,” says auctioneer Damien Matthews...

“This was a very enlightened family, and this would have been a very loving gift from a husband to wife. You can see that because the level of detail is incredible, down to the folds of the skin. There’s a heart carved at the base of it, where her finger would have been, and a receptacle in which she could keep a lock of his hair.”...

The man did return, and the box was subsequently custom-made in Ireland. “The leather box is Irish. She would have got the box carved for it – there’s a stamp on the lock with the name of an Irish locksmith,” Matthews says...

Matthews says there has been considerable interest in the piece, and that it could go to a museum of erotica, to a collector of antique ivory or Victorian art. The guide price is set at €500-€800.

Further details at Irish Times, via The Guardian. 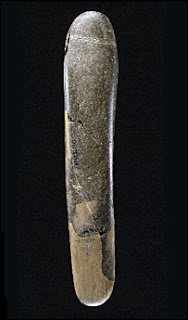 Addendum:  Found this report from 2005 in the BBC of an ancient phallic object that may have served as a sex toy:


A sculpted and polished phallus found in a German cave is among the earliest representations of male sexuality ever uncovered, researchers say.

The 20cm-long, 3cm-wide stone object, which is dated to be about 28,000 years old, was buried in the famous Hohle Fels Cave near Ulm in the Swabian Jura. The prehistoric "tool" was reassembled from 14 fragments of siltstone.

Its life size suggests it may well have been used as a sex aid by its Ice Age makers, scientists report.

"In addition to being a symbolic representation of male genitalia, it was also at times used for knapping flints.