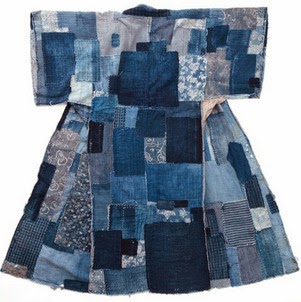 
Currently on show at Domaine de Boisbuchet, in Charente, France, the historically significant exhibition centers on the scavenger-style patchwork technique known as Boro and features some 50 pieces of kimonos, futon covers, work garments and other textiles handmade between 1850 and 1950 by Japanese peasants...

It wasn't until well into the 20th century that cotton became widely available in most of Japan. And while availability grew, it remained too expensive for most poor rural workers, ultimately leading to the widespread use of patchwork manufacturing and the tradition of passing repeatedly mended garments down from generation to generation...

The principal of "wabi-sabi" can be seen in the perfection of imperfection, "shibui" in the textiles' humble nature and "mottainai" as a reflection of a societal effort to avoid waste.

Additional text and images at the link, with a hat tip to reader Brad, who noticed the conceptual and artistic similarity to the kintsugi that I blogged earlier.