"A building made of pure light" 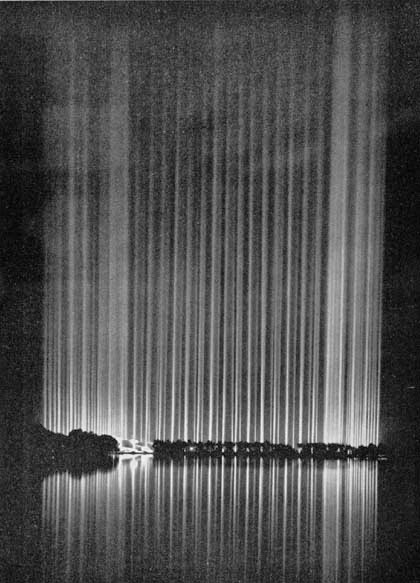 Using beams of light as an architectural medium did not originate with the Tribute in Light at the site of the World Trade Center.  The concept was featured at the 1937 Paris World Exhibition:


The three light projections of the pavilion forming a Roman number III not only referred to the Third Reich, but gave shape for the first time to Speer’s idea of the “Lichtdom”, the building made of pure light, whose final, mature form will be realized by him for the Nuremberg Party Day in the following year [photo above]. The German pavilion of the world exposition dedicated to the light and progress rose up in the night, from dusk till dawn, as a disembodied building of light, outshining all the other lights of the ville des lumières, not only the Soviet pavilion, but the Eiffel Tower as well.