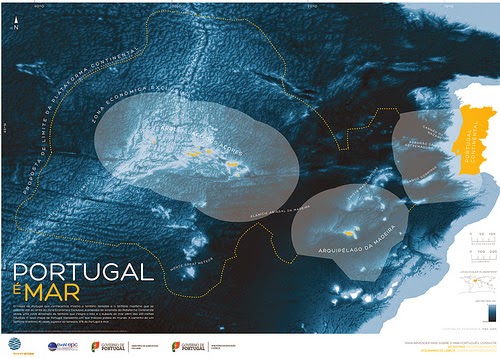 
Most countries now accept the premise on which Portugal's territorial waters are also based:


A belt of coastal waters extending 12 nautical miles (22.2 km or 13.8 mi) from the low-water mark of the coast, unless it overlaps with another country's 12-mile zone, in which case the border between both territorial waters is the median line between both low-water marks (unless both countries agree otherwise).

But this map doesn't care for mere territorial waters. As can be judged from the scale on right of the map (on the Moroccan mainland), the grey zones are too extended to be only 12 nautical miles. They constitute Portugal's Exclusive Economic Zone. For the 1982 Convention also specified that a country could claim an EEZ of 200 nautical miles (370.4 km or 230.2 mi) beyond its coastal baseline. An EEZ allows a country to claim exclusive rights, but fewer than in its territorial waters...

A few strategically placed islands can provide a gigantic (and potentially very lucrative) EEZ. Which partly explains why Argentina is so keen on Britain's Falkland Islands, or why China and Japan are arguing about a few otherwise insignificant rocks in the East China Sea.

Portugal's archipelagos provide it with three gigantic EEZs, almost contiguously stretching from 200 nautical miles west of Monchique Islet (the westernmost bit of Azorean dry land, geologically already on the North American Plate), all the way back to Lisbon.

Portugal claims that their maritime territory is 40X their terrestrial one.