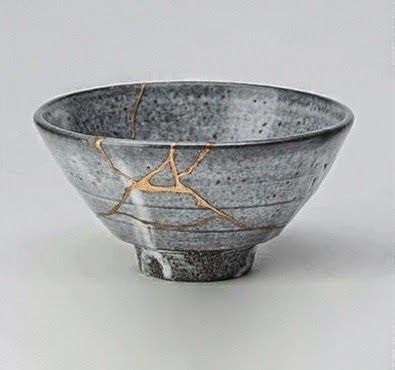 Most people would like damages to their broken items to be concealed and hidden by repair making the object look like new. But the Japanese art of Kintsugi follows a different philosophy. Rather than disguising the breakage, kintsugi restores the broken item where the damage is incorporated into the aesthetic of the restored item, making it part of the object’s history. Kintsugi uses lacquer resin mixed with powdered gold, silver, platinum, copper or bronze, resulting into something more beautiful than the original.

Kintsugi is said to have originated in the 15th century when a Japanese shogun broke a favorite tea bowl and sent it back to China to be fixed. But the repair job, which was done with metal staples - being the standard for repair at that time - detracted from the beauty of the bowl. Disappointed, the shogun enlisted a Japanese craftsmen to come up with a more aesthetically pleasing solution, and kintsugi was born...

Collectors of kintsugi are so enamored of the art that some were accused of deliberately smashing valuable pottery so it could be repaired with the gold seams of kintsugi.

There are additional photos of kintsugi at Amusing Planet.

Addendum:   A reader of this blog has commented that a company in the Netherlands offers as "new kintsugi" kit that allows persons with DIY skills to repair their own broken pottery in kintsugi fashion.