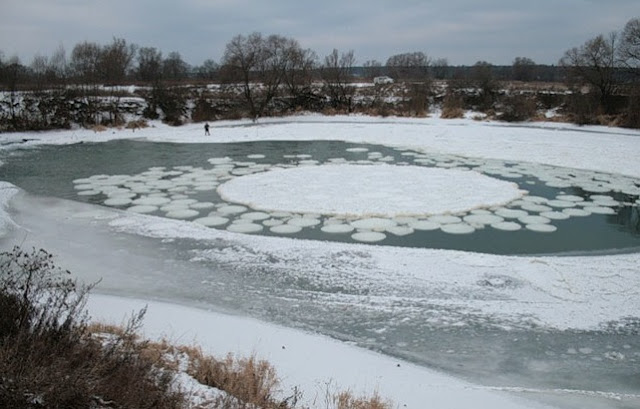 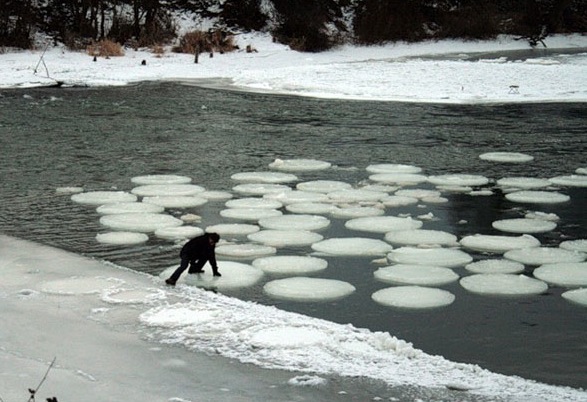 Posted in 2008:
The two photos above are part of a set posted in the often-interesting English Russia website. They depict a large round slab of ice floating on water, surrounded by a flotilla of smaller ones. No explanation is offered for their creation.

It appears to me that these formations are occurring in a river (lower picture above and some of the others seem to show flowing water adjacent to the ice floes). If so, I suspect these form when floating ice reaches an eddy in the river, and the rotation of the water grinds the edges of the floes until they become circular.

Update 2011:
Futility Closet has posted an image of a similar phenomenon recorded in New York State in the 19th century: 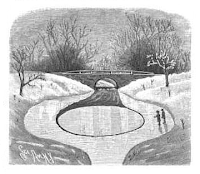 "There is a curious ice formation on the Mianus River, near the village of Bedford, Westchester County, New York. The Mianus at that place is a small stream, averaging about ten feet in width. At a place locally known as the ‘ten foot hole’ the stream widens out into a pool forty or fifty feet wide. In this pool there has formed a cake of ice about twenty five or thirty feet in diameter and perfectly circular in shape. This circular cake of ice is slowly revolving and is surrounded for about two-thirds of its circumference by stationary ice. There is a space of about three inches between the revolving cake and the stationary ice, except at the ‘up stream’ side of the revolving cake, where the water is open and the current quite swift. Each revolution takes about six minutes..."
There's also a photo here of a huge one in Canada, and a video of one in Canada.