U.S. fertility at a historic low 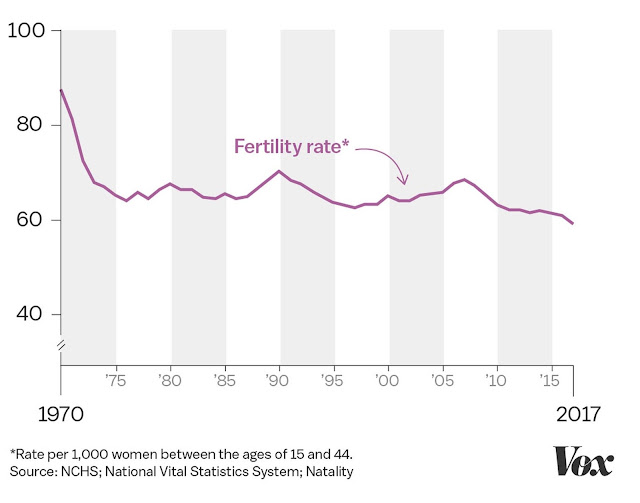 As reported by Vox:


American women are having so few babies these days that the fertility rate has hit a historic low, according to stunning provisional data just published by the Centers for Disease Control and Prevention. The number of births in the US dropped by 2 percent between 2016 and 2017, to 60.2 births per 1,000 women ages 15 to 44, continuing a general downturn that started with the Great Recession of 2008. It’s the lowest the fertility rate has been in 30 years...

“To put this in perspective, the [total fertility rate] hovered above 3.0 in the early 20th century, declined to replacement levels of about 2.1 in the 1940s; reached a peak of 3.7 in the post-World War II baby boom; and then declined rapidly to relatively stable low levels in the 1970s,” researchers from Columbia University, the University of Illinois, and other universities wrote in a commentary about the new data in the Hill...

The teen birthrate has dropped by over 50% in the past decade: 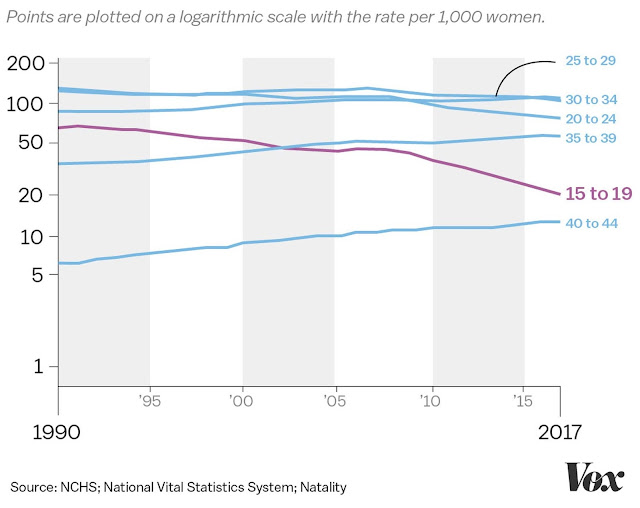 There are various reasons for this, as Vox’s Sarah Kliff has explained, but one major one is we have better access to birth control. Women these days are just as likely to be sexually active as they were in the past, Kliff reported, but how they use contraceptives has changed: ..

“It’s not ‘the sky is falling’ — but our country needs to adjust to the reduction in the fertility rate,” said John Rowe of Columbia. To do that, he laid out a few potential approaches. “One is keeping older people in the workforce longer. The second is technology — relying on animation, robots and [artificial intelligence] to boost productivity in the absence of workers. A third is increasing immigration. The [final] is boosting the fertility rate,” he summed up. Keeping older folks in the workforce is probably among the most attractive solutions, Rowe argued, since it keeps people’s minds and bodies engaged and the Social Security trust fund replenished. “But we need to start the processes now,” he added, “because the downturn in the fertility has been going on for several years. And it’s going to take two decades or so to get the policies in place and change employers attitudes.”

More data and commentary at the link.