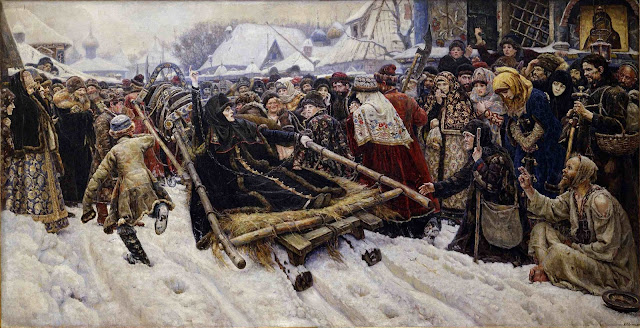 This will be my final entry on material derived from the remarkable book and television program about the Lykov family.  For newbies, see these background posts: Isolated for 40 years in the Taiga,  "Agafia's Taiga Life" (outstanding video), and Lost in the Taiga. 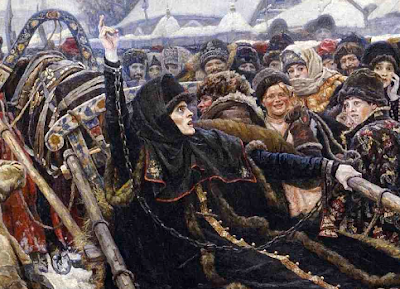 In Surikov's painting we see Morozova being taken through Moscow on a peasant sledge on her way into exile.  In this remarkable canvas we see the face of the entire Schism: sniggering priests, the concerned faces of both common and distinguished people who obviously sympathize with the martyr, the stern faces of adherents of the old ways...

The State Tretyakov Gallery offers this description of the painting (click the top image for bigger, btw - it's quite a painting):

Feodosia Prokopievna Morozova (?–1675), was a supporter of the spiritual leader of the old faith, archpriest Avvakum. Circa 1670 she was secretly tonsured as a nun; in 1671 she was arrested and in 1673 she was sent to the Pafnutief-Borovsky convent where she was starved to death in an earthen prison. The painting is devoted to the Church Schism of the 17th century. The Schism arose as a result of reforms by Patriarch Nikon to unify the rites and establish uniformity in the church service. The artist has depicted an episode when Boyarina Morozova is taken around Moscow to her place of confinement. In the centre is Morozova herself, her hand thrown up, blessing the crowd in the two-fingered manner of the Old Believers. The black spot of her clothing sounds the tragic dominant note of the painting. The crowd has divided. To the left, they are mocking the boyarina; to the right, they sympathize with her. Alongside Morozova is her sister Evdokia Urusova, who shared the fate of the Schismatics.

Peskov made the same point in his book about Agafia:


Divergencies [sic] that seem ridiculous to us provoked special protest.  According to the new books, Nikon asserted, religious processions around the church should go counterclockwise, not clockwise; the word "hallelujah" should be sung two times, not three; people should bow at the waist, not to the ground; and they should cross themsleves with three fingers, not two, as the Greeks do.  It was a debate not about faith but about the rituals of the service, about isolated and relatively minor details of observance.

It was for these differences that Morozova was starved to death.  It was for differences like this that Agafia's father and her siblings abandoned civilization to flee into the wilderness of the taiga.  And it is this sort of insistence upon details of dogma and ritual that I believe constitute the greatest weakness of religions.  These almost arbitrary distinctions create schisms that exclude the "others" from the communion of believers and theoretically from eternal salvation.  It leads to wars between Sunnis and Shiites.

I remember in the 1960s how the Lutheran Church (itself subdivided into sects that seem ridiculously unimportant) tried to promote the "new ecumenism."  But true interfaith pluralism never emerged; I suspect every faith has much at stake in maintaining its identity distinct from all others.

Addendum:  A hat tip to reader Robert "Chemsolver" who remembered that Zorba the Greek contained a reference to Madame Hortense not getting a proper burial because of the number of fingers she used to make the sign of the cross:


"Shall I go and call the priest? said Mimiko.
"What priest you fool?" said Kondomanolio furiously. "She was a Frank; didn't you ever notice how she crossed herself? With four fingers-like that-the infidel! Come on, let's get her underground, so that she doesn't stink us all out and infect the whole village!"