A "bloody" book of devotion 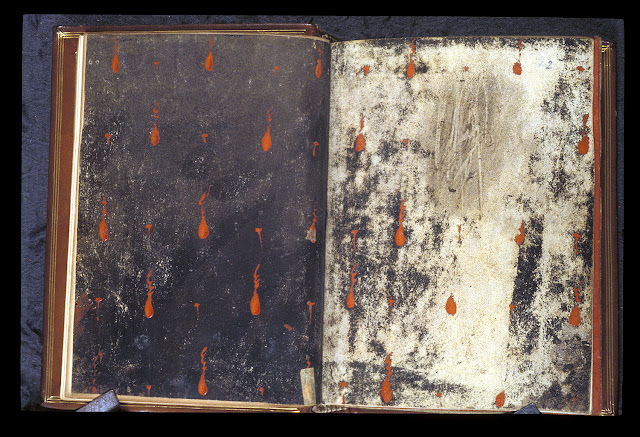 The British Library's Catalogue of Illuminated Manuscripts has a page devoted to "Kissing Images" (the habit of kissing images in books).  Discussed there is BL MS Edgerton 1821:


"The most remarkable example of a book of devotion that may show signs of having received that devotion in a direct physical form is Egerton 1821, an English product of around 1490. This book is known to those who work on prints, and was exhibited at the National Gallery in Washington DC in 2005, but is still largely unknown, I think, to those who work on manuscripts. It begins with three pages, each painted black, on which large drops of blood trickle down. The third page has been thoroughly worn. I am not absolutely certain this is the result of kissing, and part of it has been rubbed and smudged rather than merely kissed, but I think it very well could have been partially erased by kissing... " 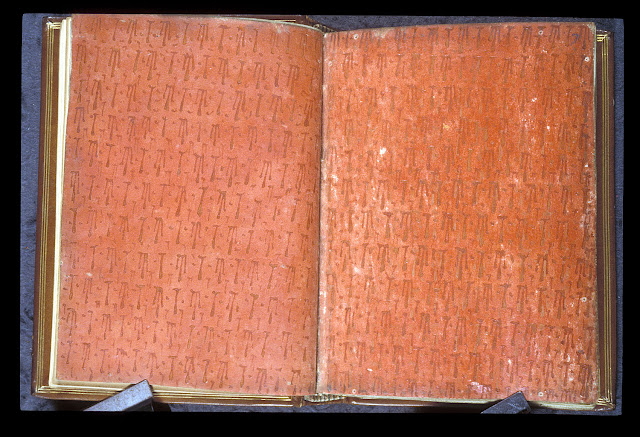 "After this the pages turn blood red, and thick gouts of blood pour down them from innumerable wounds. This disturbing decoration continues for ten consecutive pages (the last folio was cut out at some date, leaving only a stub). I count approximately 540 wounds on the bloodiest page, so perhaps taken together they were intended to represent the 5400 or more wounds received by Christ according to texts of late medieval devotion." 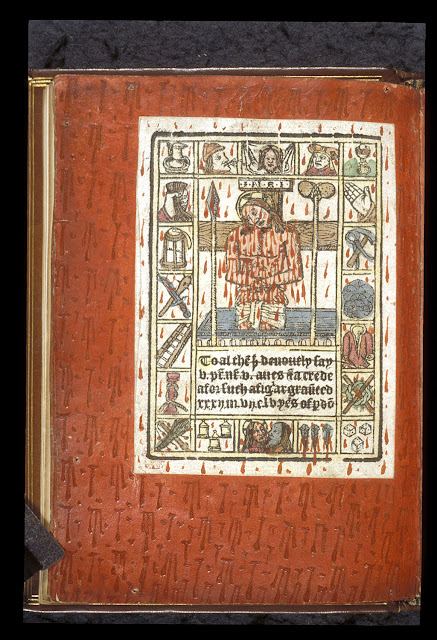 "There are two openings like this before one reaches a third with two further woodcuts pasted in. The first represents a Man of Sorrows surrounded by twenty small compartments with instruments of the passion. Facing it is a larger woodcut of the five wounds of Christ with a heart at the centre over a cross. The left image (think back to the miniature in Harley 2985) carries an indulgence (later defaced): ‘To all them that devoutly say five Pater nosters, five Aves, and a Creed afore such a figure are granted 32,755 years of pardon.’ (A combination of hyperinflation and opportunism by printers among others had seriously devalued the indulgence by this date.)"

Further discussion of this book, with additional photos, continues at the British Library site.