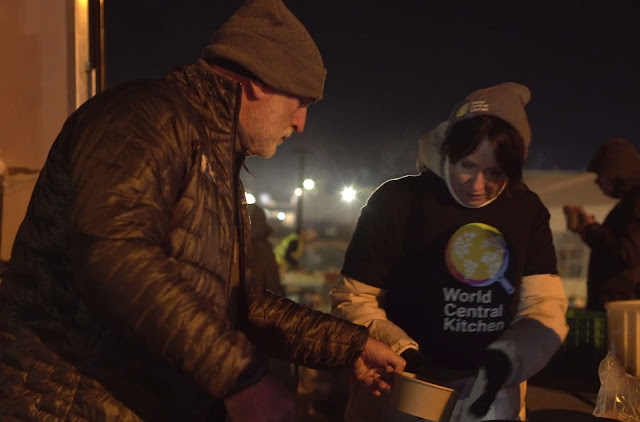 World Central Kitchen was frankly not on my radar screen of charities (most of my favorites being medicine- or education-related) until Putin's war on Ukraine brought me information about their refugee relief efforts.  I appreciate the comments about WCK added to that post by several readers, and today I found more information about the group at Bloomberg:

Within hours of Russia’s invasion on Feb. 25, the nonprofit disaster-relief organization co-founded by chef José Andrés [in pic above] started dishing out food. World Central Kitchen has now established kitchens at eight of Ukraine’s border crossings with Poland, and has created meal distribution centers in six countries including Romania and Hungary. In Poland alone, says Director of Communications Strategy Lisa Abrego, WCK has served more than 37,000 hot meals including chicken and rice and pasta; the total was nearing 45,000 late on Tuesday. Everyone from fire fighters to nuns has pitched in to help cook and serve food.
“There are many ways to fight. Some people fight making sure people are fed,” said Andrés via email. “Those are our people, and we will be supporting them.” The chef was nominated for a Nobel Peace Prize in 2019 and has pledged a portion of his $100 million award from Jeff Bezos to address the current crisis.
Inside Ukraine, WCK has partnered with local restaurants to feed people who have chosen not to flee. The organization will expand its work in the country as more shelters are established...
Rather than cold meals or MREs (meals ready to eat), the organization focuses on the dignity inherent in eating a home-cooked meal—and taking immediate action.

More photos at the link.
Most readers will want to do something concrete.  A simple Google search yields 50,000 hits.  I'm going to focus on World Central Kitchen.  I made my second financial contribution today (click here) in memory of my antiwar activist sister.
Update from WCK on March 13:

With bombs still falling day and night, millions of Ukrainians continue to flee the country or relocate west to the city of Lviv. In response, WCK is rapidly expanding our #ChefsForUkraine response to distribute food—including hot, fresh meals—in five countries. We've now opened a kitchen and food supply depot in Poland, right on the border with Ukraine, and have multiple warehouses active in Lviv where trucks are filled with food to head east reaching cities like Odessa and Mykolayiv. We are also supporting more restaurants to serve meals in Ukrainian cities including Kharkiv and Kyiv, which remain under active attack. 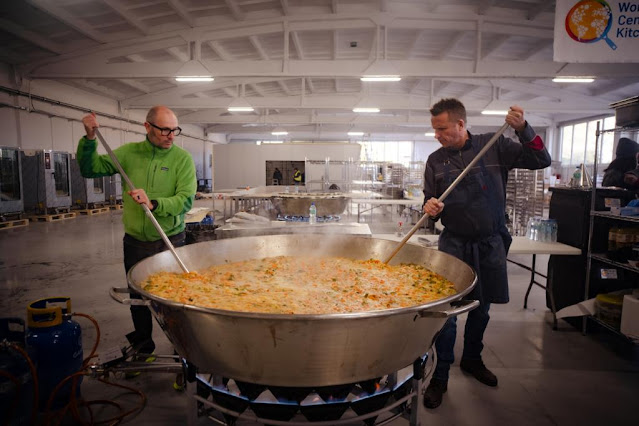 The new WCK Relief Kitchen is located in Przemyśl—a Polish city just a few miles from the border with Ukraine that is receiving tens of thousands of refugees every day. From this kitchen, our team has the capacity to scale up and cook 100,000 meals per day utilizing 12 massive WCK paella pans and 12 large ovens...
Within Ukraine, we are now working with dozens of chefs and restaurant partners across 12 cities to provide meals to those who remain at home or are escaping to other locations within the country. More families are now beginning to stay in Lviv rather than leave Ukraine. The UN estimates over 2 million people are already internally displaced, so the WCK team, alongside our partners in Lviv and other cities across Ukraine, are cooking more meals each day. We are delivering the freshly prepared meals to 50 locations in Lviv alone, and that number goes up daily.

I repeated my gift today.  You can support WCK in Ukraine by clicking here.