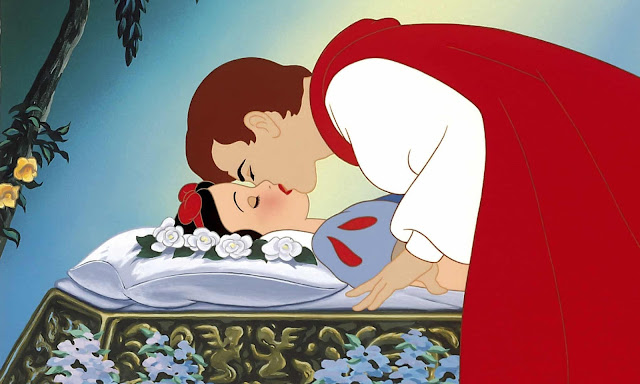 "Very little ammunition is required for a culture war these days, so long as your troops are primed to mobilise at the drop of a blog. Julie Tremaine and Katie Dowd, two writers for the online newspaper SFGate, discovered this last month. Their review of the revamped Snow White ride at Disneyland was generally positive, but queried a new scene showing the prince giving Snow White the all-important “true love’s kiss”.

“A kiss he gives to her without her consent, while she’s asleep, which cannot possibly be true love if only one person knows it’s happening,” they wrote. “It’s hard to understand why the Disneyland of 2021 would choose to add a scene with such old-fashioned ideas of what a man is allowed to do to a woman.”

Discussion of the current brouhaha at The Guardian, which ran a related story last month about potentially offensive stereotypes in the Disney catalogue.
Addendum:  An interesting comment from reader Charles - "In some of the earliest versions she is raped while she is unconscious..."

" One day, while a king is walking by, one of his falcons flies into the house. The king knocks, hoping to be let in by someone, but no one answers and he decides to climb in with a ladder. He finds Talia alive but unconscious, and "...gathers the first fruits of love." Afterwards, he leaves her in the bed and goes back to his kingdom. Though Talia is unconscious, she gives birth to twins — one of whom keeps sucking her fingers. Talia awakens because the twin has sucked out the flax that was stuck deep in Talia's finger. When she wakes up, she discovers that she is a mother and has no idea what happened to her."