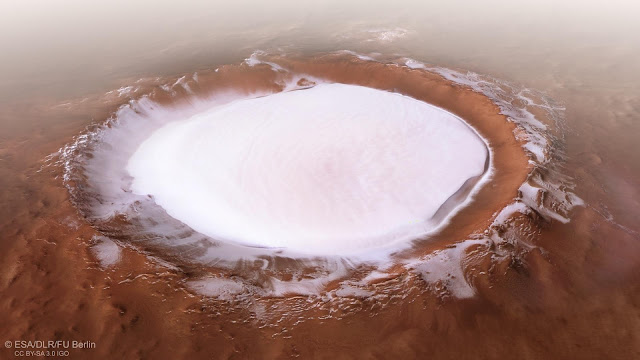 Korolev crater is 82 kilometres across and found in the northern lowlands of Mars, just south of a large patch of dune-filled terrain that encircles part of the planet’s northern polar cap (known as Olympia Undae). It is an especially well-preserved example of a martian crater and is filled not by snow but ice, with its centre hosting a mound of water ice some 1.8 kilometres thick all year round.
The very deepest parts of Korolev crater, those containing ice, act as a natural cold trap: the air moving over the deposit of ice cools down and sinks, creating a layer of cold air that sits directly above the ice itself.

Mars' polar caps have a mixture of carbon dioxide ice and water ice, "which vary greatly in proportion to one another depending on the season."
Stuff like this continues to boggle my old man's mind, because when I was growing up, water was considered to be rare in the universe and one of the factors that made life on Earth possible and "unique."