"The small plane arced over a blue lagoon near the Caribbean Sea, flying low above a family in a boat on Tuesday afternoon. As they clapped, it released a pink cloud into the sky. 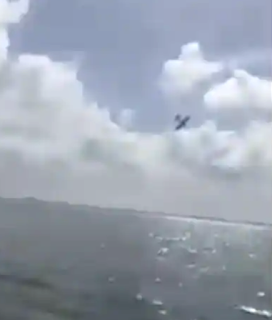 “Girl! Girl!” a man aboard the boat yelled in Spanish, celebrating the dramatic results of the elaborate gender-reveal stunt for a new baby in the family. “It’s a girl!”
Seconds later, the family’s video shows, the small aircraft plummeted into the
Nichupté Lagoon, a body of water off the east coast of Cancún, as the family and their guests watched in disbelief.
Both the pilot and the co-pilot were killed in the crash, authorities later confirmed to local media.
The crash is the latest incident of a gender-reveal celebration that turned fatal. In recent years, a practice that became popular following a 2008 parenting blog post has sparked multiple wildfires, led to several deaths in explosions and caused at least one other plane crash."