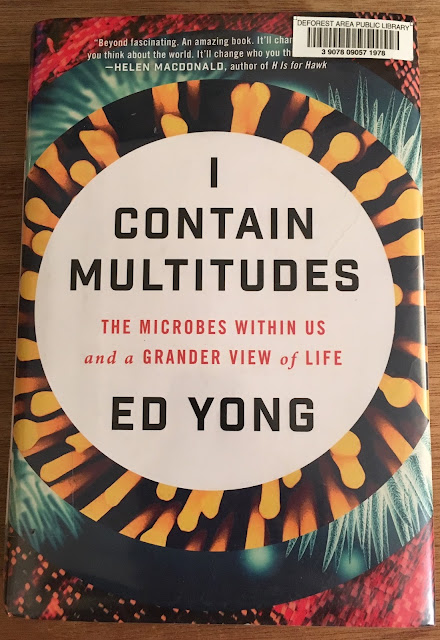 A tip of the hat to the TYWKIWDBI reader who recommended this book in a comment.  Ed Yong is a multi-award-winning science journalist currently on staff at The Atlantic.   In this book he expands upon a number of his previous essays related to the microbial world and presents a ton of information which I only had time to quickly browse.  Herewith some excerpts:


"To allow our first microbes to colonise our newborn bodies, a special class of immune cells suppresses the rest of the body’s defensive ensemble, which is why babies are vulnerable to infections for their first six months of life. It’s not because their immune system is immature, as is commonly believed: it’s because it is deliberately stifled to give microbes a free-for-all window during which they can establish themselves...


Milk is a mammalian innovation, common to platypuses and pangolins, humans and hippos, its ingredients varying according to what each species needs. Human milk is a particular marvel. Every mammal mother produces complex sugars called oligosaccharides, but human moth­ers, for some reason, churn out an exceptional variety: so far, scientists have identified more than two hundred human milk oligosaccharides, or H.M.O.s. They are the third-most plentiful ingredient in human milk, after lactose and fats, and their structure ought to make them a rich source of energy for growing babies—but babies cannot digest them.

When German first learned this, he was gobsmacked. Why would a mother expend so much energy manufacturing these complicated chemicals if they were apparently useless to her child? Why hasn’t natural selection put its foot down on such a wasteful practice? Here’s a clue: H.M.O.s pass through the stom­ach and the small intestine unharmed, landing in the large intestine, where most of our bacteria live. What if they aren’t food for babies at all? What if they are food for microbes?...

Human milk has evolved to nourish the microbe, and it, in turn, has evolved into a consummate H.M.O.vore. Unsurprisingly, it is often the dominant microbe in the guts of breast-fed infants.


Akkermansia muciniphila, one of the more common species of gut bacteria, is over 3,000 times more common in lean mice than in those genetically predisposed to obesity. If obese mice eat it, they lose weight and show fewer signs of type 2 diabetes.

Gut microbes also partly explain the remarkable success of gastric bypass surgery – a radical operation that reduces the stomach to an egg-sized pouch and connects it directly to the small intestine. After this procedure, people tend to lose dozens of kilograms, a fact typically accredited to their shrunken stomachs. But as a side-effect, the operation also restructures the gut microbiome, increasing the numbers of various species, including Akkermansia. And if you transplant these restructured communities into germ-free mice, those rodents will also lose weight.

All of which makes this more ominous:


"[Antibiotics] are so wantonly used that, on a given day, between one and three per cent of the developed world takes an antibiotic of some kind... even short courses of antibiotics can change the human microbiome..."