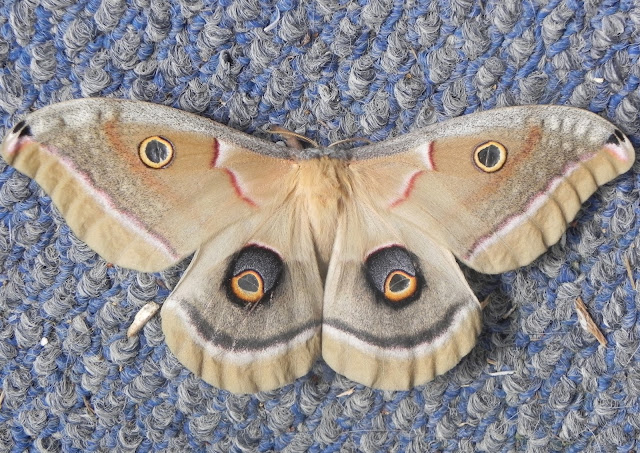 "There is a species of butterfly on the hind wing of which a large eyespot imitates a drop of liquid with such uncanny perfection that a line which crosses the wing is slightly displaced at the exact stretch were it passes through - or better say under - the spot: this part of the line seems shifted by refraction, as it would if a real globular drop had been there and we were looking through it at the pattern of the wing."

----Vladimir Nabokov, from a lecture/essay published in Bulletin of the New England Modern Languages Association, January 1941

The embedded image is not of the butterfly Nabokov is describing (he doesn't cite the species in this essay), but rather a Polyphemus silkmoth, which is of course famous because of the prominent eyespots on its hindwings (from which it derives its name).  This specimen was one I reared back in 2012 and photographed before release.

I found the quotation in Nabokov's Butterflies - an immense (800-page) collection of his scientific and fiction writings.

Related: Raising Giant Silkmoths - one of the many interesting pages at Marcie O'Connor's Prairie Haven website [your humble author is honored to be included in one of the Bench Photos].