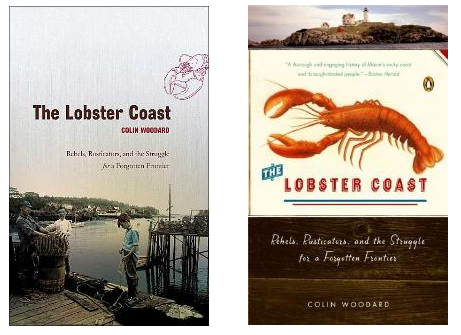 I have visited Maine several times and always enjoyed my stay there, but had never read a proper history of the state until a friend recently recommended this book.  Particularly interesting to me was the geologic explanation for the remarkable profusion of marine life in the Gulf of Maine, and the descriptions of the staggering abundance of lobsters and fish harvested from this region in prehistory and the early post-settlement era.


"... Indians depended on the living bounty of the Gulf of Maine...they left staggering shellheaps behind; a single heap of shucked oyster shells in Damariscotta covered an area of more than sixty acres to a depth of nearly thirty feet." (p. 63)

"Lobsters were everywhere.  On their way to the Kennebec, Raleigh Gilbert's men [early 1600s] caught fifty lobsters "of great bignesse" by simply rowing a boat over shallow water and gaffing the unsuspecting lobsters with a boat hook..." (p. 81)

"In colonial days, a small boy could bring home enough [lobsters] to feed several families by siimply wading along the shore at low tide and gaffing the huge five- and ten-pound beasts hiding among the rocks... One group of indentured servants in Massachusetts became so upset with this diet that they took their owners to court winning a judgment that they would not be served lobster more than three times a week.  Lobsters were sometimes taken in great numbers and strewn on the fields as fertilizer..." (p. 170)

"The catch in those days would astound today's lobsterman.  Portland lobstermen in 1855 averaged seven four- to six-pound lobsters in every pot, every day throughout the four-month season.  (By comparison, today's lobstermen often find only one legal-sized lobster per trap, and it typically weighs between a pound and a pound and a half).  (p. 177)

"At the height of summer, hotel owners would pay as much as five cents for a good, two-pound dinner table lobster...  Smaller lobsters were no longer discarded, as the canneries would buy them for $1 per hundredweight..." (p. 186)

"Halibut, a great flatfish that could weigh nine hundred pounds and measure nine feet in length, had once been so numerous they were "looked upon as a nuisance" by cod-seeking fishermen.. On at least one occasion, a vessel using the old hook-over-the-side method caught more than 250 in three hours..." (p. 203)

In this regard the book reminded me of the spectacularly unbelievable accounts of pre-settlement North America described in Paradise Found.

Less pleasant are the accounts in the book of the pillage of these resources (only recently modulated by regulatory restrictions) and the human-human interactions, beginning with the arrival of Europeans and continuing to the modern era as the Boston/New York population "invades" rural coastal Maine.