Gleanings from "The Handmaid's Tale"

When I reviewed Margaret Atwood's The Blind Assassin nine years (!) ago, I assigned the post to the "recommended books" category.  I can't quite do that for The Handmaid's Tale, so I'll file this post in the English language category, because she does know how to turn a phrase.  Some examples:


"We lived, as usual, by ignoring.  Ignoring isn't the same as ignorance, you have to work at it." 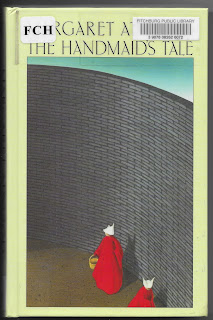 "I went to sleep after all, and dreamed I was wearing earrings, and one of them was broken; nothing beyond that, just the brain going through its back files..."

"But there must be something he wants, from me.  To want is to have a weakness.  It's this weakness, whatever it is, that entices me."

"Better never means better for everyone, he says.  It always means worse, for some."


glister - "to gleam, glisten, or coruscate."  And to show that I misremember my Shakespeare, the correct phrase in The Merchant of Venice is "All that glisters is not gold" - not "glistens."

ancestress - I thought this perhaps a neologism for the context of the story, but it is an accepted term for a female ancestor.


"It was Lulke who told me about mayday, though.  Mayday, mayday, for pilots whose planes had been hit...  Do you know what it came from? said Luke.  Mayday?... It's Frenchy, he said.  From m'aidez.  Help me."