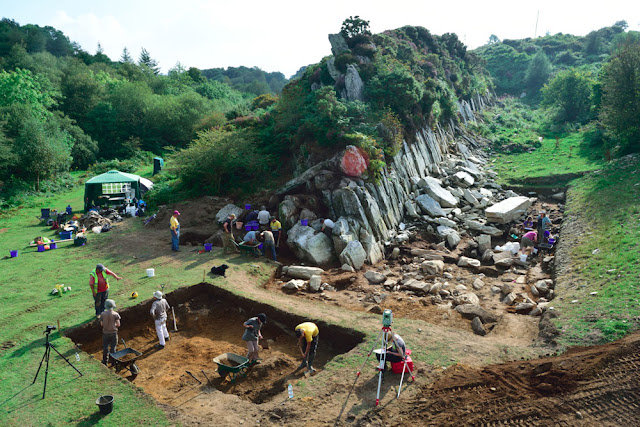 As reported at the website of University College London:


Excavation of two quarries in Wales by a UCL-led team of archaeologists and geologists has confirmed they are sources of Stonehenge’s ‘bluestones’– and shed light on how they were quarried and transported...

The very large standing stones at Stonehenge are of ‘sarsen’, a local sandstone, but the smaller ones, known as ‘bluestones’, come from the Preseli hills in the Pembrokeshire Coast National Park. Geologists have known since the 1920s that the bluestones were brought to Stonehenge from somewhere in the Preseli Hills, but only now has there been collaboration with archaeologists to locate and excavate the actual quarries from which they came...

The special formation of the rock, which forms natural pillars at these outcrops, allowed the prehistoric quarry-workers to detach each megalith (standing stone) with a minimum of effort. “They only had to insert wooden wedges into the cracks between the pillars and then let the Welsh rain do the rest by swelling the wood to ease each pillar off the rock face” said Dr Josh Pollard (University of Southampton). “The quarry-workers then lowered the thin pillars onto platforms of earth and stone, a sort of ‘loading bay’ from where the huge stones could be dragged away along trackways leading out of each quarry.”..

“We have dates of around 3400 BC for Craig Rhos-y-felin and 3200 BC for Carn Goedog, which is intriguing because the bluestones didn’t get put up at Stonehenge until around 2900 BC” said Professor Parker Pearson. “It could have taken those Neolithic stone-draggers nearly 500 years to get them to Stonehenge, but that’s pretty improbable in my view. It’s more likely that the stones were first used in a local monument, somewhere near the quarries, that was then dismantled and dragged off to Wiltshire."

A search is underway for the original Stonehenge.

Abstract of the research publication in Antiquity.