The other Man in the Iron Mask 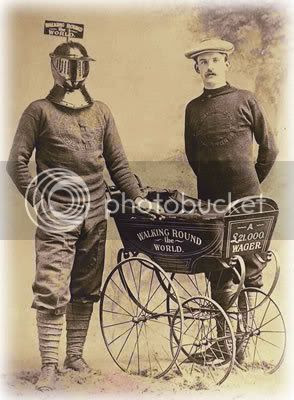 ... one evening in 1907 at the National Sporting Club in London, Morgan and Lonsdale were arguing whether a man could walk around the world without being identified. Bensley, a notorious "playboy" and womaniser with a substantial private income, overheard the conversation and offered to test the proposition on their behalf...

Bensley had to satisfy 15 conditions, including:

* Bensley was never to be identified;
* He was to walk around the world but first through specific 169 British cities and towns in a specific order; to prove his visit he would have to collect a signature from a local prominent resident. After that he would begin a tour of 18 countries and would have to visit them, also in pre-specified order.
* Bensley was to finance himself, starting off with just GBP 1 and selling picture cards about himself;
* Only a change of underclothes was allowed as baggage;
* He was to complete the journey wearing an iron mask weighing 2 kg (4.5 lb) from a suit of armour;
* He was to push a perambulator (baby carriage) the entire journey;
* Another man was to accompany him to see that he fulfilled the conditions in all times and
* On the journey he was to find a wife without her seeing his face (note that he was possibly married already).

If that interests you, more details and links are available at Wiki.