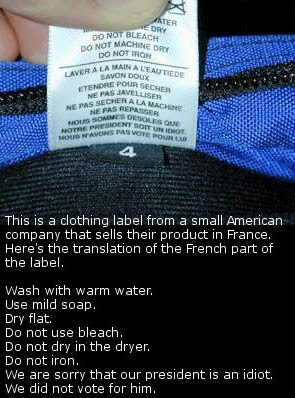 The Tom Bihn company placed these labels in tote bags it was selling in France. Originally created by the seamstresses and intended as a joke about the company's president, the French public interpreted it as a criticism of Jacques Chirac. Since it was an American company, it then hit the internet as a commentary on George Bush, and immediately went viral. The company cleverly responded by creating T-shirts with the label displayed on the chest; the resulting sales raised $18,480.00 for the Seattle Vet Center for their Homeless Vet Program.

If TYWKIWDBI were made of fabric, it would have this label